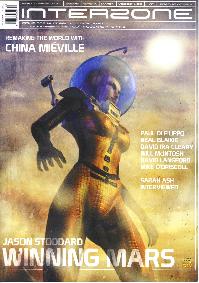 The Stoddard story is illustrated on the cover of this issue – but note that the picture a foxy chick in a skingtight spacesuit isn’t in any way misogynistic, as it is an important part of the Stoddard story ;-) Of course, this spacesuited chick is perfect for the SF market, whereas sister mag The 3rd Alternative prefers heroin chic chicks with baldie heads for the most part.

And the good news for Interzone readers is that story is excellent, and it has the very rare distinction of having artwork which goes beyond being good, but actually enhances the story – more of this later.

The story has several things going for it. Firstly, it successfully intertwines two story strands – the drama of a Reality TV Show race across Mars with the financial and media politicking which raised the money for the TV show. For my money, this latter element is the better of the two, with the twists and turns of the negotiations being cynically believable. Nice touches include having the major sponsors GM and Boeing pulling out and having to make do for Kia and Cessna, the skimpy spacesuits to ensure eye candy for the viewers, the corners being cut by the very flaky Russian hardware guys.

The race story works well for the most part, certainly in comparisoin to a similar race story, ‘Trophies and Treasures’ by erry Oltion and Amy Axt Hanson in Analog, Sept 2004, which was pretty dire.

In contrast to that story Stoddard populates his competitors with characters mostly as rounded as you can get in such a short space of time (although the bad dude is a little stereotypical). The race itself generates drama for the reader (one team is, as you might expect, stranded at one point), with the bade dude winning the money but not getting the fanfare as he opted out of rescuing the stranded team (not that that would worry him!). The only slight fly in the ointment is the off-handed way that the team which came second rescue the stranded team, as the rescue had been deemed impossible earlier in the story. For my money, having the stranded team simply fade out of the picture, with the bad dude getting the cash and the kudos, would have been more in keeping with the feel of the story.

As mentioned above, the story is given extra oomph by the inclusion of some excellent artwork, featuring TV screenshots and contestant profiles. The whole package is so much better than the tired ‘stranded on The Moon/Mars etc’ stories which appear regularly in our genre.

With just a couple of ‘Strange Horizons’ stories, and a Writers of the Future story to his name, this story bodes well for this Stoddard (not to be confused, as I was initially, with James Stoddard, who has appeared in F&SF a couple of times).

A three-pager with a far, far future setting. Hiroshige is evidently close to the end of time, and light itself is a commodity which is a distant memory. But the suggestion of a glimmer of light draws the attention of this ancient, cold creature, but whilst that is a false dawn, there is hope to be found even in that lonely place.

For what it’s worth, I would have a requirement on any magazine which wishes to call itself an SF magazine to have at least one PDF story each year. Here Di Filippo entertains with a novel of a guy whose life just isn’t going anywhere, who finds an online virtual game to offer much more. The online world is slightly different to the norm, as it is set in Gondwanaland, a name given to the single continental mass which existed on Earth a l-o-n-g time ago. Furthermore, those playing the game are so immersed in the game that they appear to be actually living in that world, not ours.

Mutt Spindler, erstwhile sad sack, decides to chance his arm on arranging a meet with a girl with whom he has fallen in love with through online messaging. Main problem : the only address he has for her is in Gondwanaland. Fortunately, he is able to match her location on her map, with a coastline on Earth, and he heads off, heart ruling head, to meet her.

And, I’m pleased to say that, one way or another, he is united with his true love, and is in a world with prospects.

Interzone has for a number of years published the winner of the James White Award – a competition for unpublished writers. Fortunately, the new regime is honouring this tradition. Fortunately, as the story is a very good one (not always that case in recent years). Ruane takes a current scourge (at least here in the UK) of self-service storage facilities, and creates a very strange Lost and Found service, in which you bring something you have found, and exchange it for something you (or someone else) have lost.

The A to Z arrangement of units enables the story to progress through some intriguing lost property (I’m not going to tell you any, as I think you should make the effort to read the story), to the final Lost Item (Lost H…..) which the new owner aims to return to its original owner.

A sort of throwback to the British New Wave of the 60s/70s – a four page ‘story’ in which people some way ahead of the human race now, ponder the nature of determinism as they fly amongst the clouds. I’m sure that readers of a more intellectual/academic bent than what I am will come up with the underlying message. Cleary’s steampunky circus tale ‘The Automatic Circus’ in T3A #36 impressed me.

Another new writer who delivers an effective story of love between the species. Jerea has fallen in love with an alien, but they have been separated by death. However, there is a way that they can be reunited – she has to collect every single piece of totem carving on Earth which has come from his planet. Only then can she re-combine, from those totems, his essence, and bring him back to life.

The first of the TTA issues was a ‘solid’ issue, the second was a good issue, but, dangnabbit, this is a top quality issue. Considering only Paul Di Filippo is a properly established writer, TTA are to be congratulated on their use of new talent. It feels to me like a magazine that bigger name writers should be aiming to get into, and I’d recommend TTA post copies of this issue to those who have written in IZ in the past to invite them to submit stories.