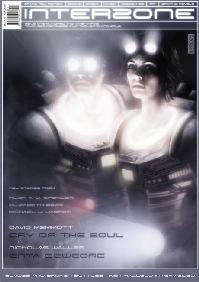 Waller has had a couple of stories in Interzone. Interestingly, his ‘Chillered’ #190 July/August 2003 left me mightily unimpressed, and I suggested that the dark story was a poor attempt by IZ to keep up with T3A!

Like his story ‘Sandtrap’ in Interzone #187 March 2003, this story is SF. Peter Collard is returning to Earth, revisiting the SW England which was where he was born and raised. Sadly, the bucolic days of his youth are long past, and most of England (and Earth) is smoking ruin, the result of warfare in which he has had a part and he is culpable.

Quoting Olde English poetry (the title is evidenly Olde English for ‘work of giants’), and feeling the eyes of ancient kings on him, he has returned home with suicide on his mind.

He comes across a dishevelled survivor, a young woman hiding in a nearby cave, and they discuss the future of humanity – are the Von Neumann machines which are threatening our destruction to be the next stage in our evolution? Tricked by the young woman, who has a companion lurking nearby, Collard is mortally wounded, but kills the humans in the mistaken belief that they are the AI enemy.

An OK story, of the kind regularly features in Interzone, similar in some ways to a couple of Stephen Baxter’s ‘Xeelee’ stories, but IMHO some way short of a Hugo nominee standard, as SFRevu sees it. (And the story illustrations aren’t quite up to the usual standards!) Where I feel this story falls down is that it refers to a lot of past events in a way which suggests that the story is one of a linked series, and if that was the case, and this is the last we see of Collard having been through some of these past events with him im previous stories, then this story would work better.

Spencer has fun with quantum realities, with technical memos from those working on scientific experiments which have gone wrong interspersed with the consequently quantum end of the world nightmares one unfortuante individual is having. Spencer’s ‘The Z-Burger Simulations’ in On-Spec 44 also entertained.

The illustration with this story is very TTA, and the two-column pages are set on a black background.

A very assured story – in which a priest is able to unravel some complex mysteries surrounding the aliens which have arrived on Earth, and having had the truth revealed to him, as Moses, he has to spread the world. Interestinly, this works well as a singleton, although in fact it is, accorind to Jasper’s website an extracted story from his Wannoshay Cycle novel series.

Jasper has had a couple of sales in Asimovs, and I noted that the story which was his first professional sale, ‘Natural Order’, ‘bode well’.

Elizabeth Bear. When You Visit the Magoebaskloof Hotel Be Certain Not to Miss the Samango Monkeys.

However, Bear’s story is notable by being a) short and b) good. In little over two sides she sets up a dramatic situation, engages us with the scientist in question, through linking to her childhood (hence the title), and ends the story.

David Memmott. Cry of the Soul.

For someone who won the Rhysling Award for a poem back in 1991, there is some very clumsy writing in this sub-Lucius Shepard story. Benito Cortezar has Mayan roots, his grandfather being very much one comfortable with the ‘old ways’. Benito (Bennie) has lost track of these old ways, in creating a VR simulation of ancient settings, but whilst in said setting, his grandfather reappears to help him to embrace the old ways and to defend his heritage against the new ways.

Leaving aside a couple of missing words (how does that happen in these days of word processing and transferring files?), there are some very convulted sentences, and the story regularly returns to the past to run through events in a way which jars. It comes across as being somewhat By The Numbers. The aforementioned SFRevu review referred to this story as being ‘well written’ – perhaps that reviewer had a different version of this issue to mine ;-)

The middle three stories were the pick for me, in a good issue. The aforementioned missing words, and a missing sentence from the Jasper story (give TTA their due, there was a printed, inserted erratum sheet inserted in the appropriate page) need ironing out, but two issues into the new regime and I’m impressed. Now, where’s that copy of #196…..