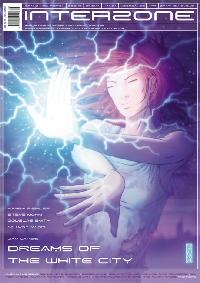 Only a couple of years ago things were looking rosy for the British SF magazine market. Interzone had been publishing monthly since 1990, Spectrum SF was providing some very solid SF content, and new magazine 3SF from Big Engine had just been launched.

Sadly, Spectrum SF slowly faded away, and 3SF managed just a few of issues, leaving Interzone on its own. However, Interzone’s monthly publication started to become erratic, as it failed to maintain 12 issues a year. After an announcement that it would return to a bi-monthly schedule, and amid rumours about financial difficulties, the futue was looking bleak. Step forward, Andy Cox of TTA Press, who has taken Interzone on, and from whom this is the first issue since the final edition of the David Pringle Interzone earlier this year (sadly Interzone had been so sporadic that UK distributors dropped it, which meant that a number of bookshops didn’t get a hold of that final issue)

The magazine is styled very much like that of The 3rd Alternative TTA Press’s ‘speculative fiction’ magazine, which is to say, very stylish – glossy cover, lots of artwork. Considering that Interzone #1 and #192 were notably similar in presentation (I haven’t got a hold of #193 yet), you have to see the presentation as being a revolution, not an evolution. So what of the content?

The magazine starts with an issue of David Langford’s Ansible Link, as if to reassure the longstanding Interzone reader than some things will stay the same. However, the content is spread over two pages by dint of a half page image background taken from SKy Captain and the World of Tomorrow, and a slightly smaller pic of Kong ripping apart the pterodactyl with Fay Wray (now RIP) cowering at his feet.

Steve Mohn. Songs of the Earth.

The fiction begins with a strong story from Mohn, featuring a strange world dominated by an enormous tree which dispenses tech and other skills to the population (not always wanted). Mohn slips in the background as the story develops, as a young girl and her friend attempt a climb which will be beyond that which others have completed. And, indeed, she does indeed impact on the tree, and its key role in the society.

Another strong story, looking at humanity’s treatment of indiginous people – a senior officer in a crew who specialise in ‘dealing with’ indigenous races on other planets, come across a planet with a race who are strangely unmoved by their presence. Reaction to the humans only occurs when the sculptures evidently deified by the indiginous race are despoiled. The nature of these sculptures is revealed, as is the huge arc of linked statues which almost completely spans the city, which dominates the skies. The crew of humans get what they are after – the omnipotence which the indigienous race appear to have – but rather regret it, as awareness of the extent of humanity’s brutality is brought home to them with a vengeance.

Karen D. Fishler. Someone Else.

Fishler has had a couple of stories published in The 3rd Alternative, and this continues a strong selection of stories from a newish writer. A young woman, still coming to terms with a relationship breakup, finds herself obsessing by fleeting glimpses of her ex- and someone very like herself. She finds out that she is closer to the truth than she thinks, as her alter ego is in fact cloned from herself.

Marga finds her role in supporting a repressive regime is brought to an end by strange dreams she is having, dreams shared by the rest of the population. Those in control are concerned at the messages in those dreams, and she is required to confront that which is attempting to communicate with/through her. We find out that she is part of a community descended from human settlers, and those Great Machines which dominate life in the city have in fact taken more control than was intended. She is being called by one of the early settlers, who is trying to redress the balance.

A short piece in which we find out just what those marketing people can sell to us.

Nick Lowe’s Mutant Popcorn file review column (in which he covers Thunderbirds, Around the World in 80 Days, and Spiderman) makes the move from the Pringle-edited Interzone. Other content:

Notably missing from the Pringle-edited Interzone are reviews from a number of regular reviewers including Evelyn Lewes and Gary Westfahl, and The Books Received pages.

A solid first issue which augurs well for the future. Cox has resisted the tempation to load up the issue with Big Names, and provided fiction from a younger generation of writers, some of whom are known from The 3rd Alternative. There may be some long-standing Interzone subscribers scratching their head as they try, without success, to find an Eric Brown story (“..calls itself Interzone, but it doesn’t have an Eric Brown story?”)