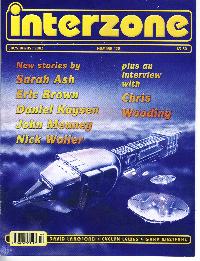 Jack’s love life takes a turn for the worse when Anya leaves him. In his cups (or pints of Guinness) the Irishman is able to take advantage of the alien presence, the Zajinet, to sort things out.

An implant in his brain appears to be a painless solution, but he has a choice to make with regard to the route to true love. The first path, that of hatred, turns him into a muscle-bound hunk who doesn’t know his own strength. When he does finally realise his new, destructive nature, he forcibly arranges for a re-programming.

Now he is blessed with the ability to see emotions, a talent which quickly pales as the emotional bonds which unite (and divide) us are also more visible to others. He flees back to his native Ireland, seeking refuge in a remote farm house. Surely he can cause no problems there. But, in one of the highlights of the story, the emotional (ahem) bond between the farmer and one of his sheep is betrayed.

Brown has fun with a love affair across time. A man who has been the subject of huge media attention on account of being ‘frozen’ for a year is now back to normal, he wants to tell his story to Amy Sullivan, a reporter of no great fame.

Why? To tell her that whilst his body has been frozen, he has spent a lifetime in the far future with the descendants of humanity, and his return to Earth has been on account of his death in that far future timeline. Furthermore, he spent most of that time in love with another person who has yet to be taken to the future – no less that Amy Sullivan herself!

He has come to tell Amy of their future love, and her imminent fate of being frozen. She returns home to wait to be transported to the future. And it is as her future partner has said. And, like the newly unfrozen man, when she unfreezes a year later, he is waiting for her. Ahhhh.

Kaysen has provided a couple of stories in his ‘Planet Management’ series. None are alike, and here he eschews a conservative approach by challenging the reader with a complex, multi-faceted tale. Part One is set in a curious world, in which human lives are influenced by, or rather, steered by, powerful forces. Kept in a barbed wire compound of sorts, the story of Noah, distorted by time, is but one element of the strangeness.

A composer, highly thought of in court, finds his muse is taken when his operatic diva dies horribly. Bereft, his life begins to fall apart. That is, until a mysterious stranger shows him the automaton in which he has captured the very essence of the diva. Can the automaton replace the flesh and blood inspiration?

Two stylistic issues. Firstly, a clumsy piece of writing jars early on : Avenel is at the tomb of the diva, remembering the red weals weeping clear fluid on her charred black flesh, and then a paragraph later the same words appear as he relives the moment of her fiery death. Secondly, the doctor who creates the automatic has a voice ‘darkly soft, like evening shadows’ – we know this because we are told not once, but twice. For me that is a phrase that not only shouldn’t be read twice in a story, but shouldn’t be read once! (I say this to myself with my face showing a black frown like the breaking of crystal).

Fine as far as it goes, but it doesn’t really go anywhere that hasn’t been covered before (I was minded of Sarah Singleton’s excellent ‘The White Devil’ from Spectrum SF#9 last year, featuring female automota in a quasi-Shakespearean setting.)

A thoroughly unpleasant story with no redeeming features. A member of a murderous gang who have committed heinous acts of butchery on innocent victims (men, women and children) recounts the drug-induced slaughter to his probation officer. And really that’s about it. According to bio Waller was an assistant storyboard artist on ‘An American Werewolf in London’ and here we just have the most gruesome bits of horror and nothing else. Granted they are much longer, but Thomas Harris’ ‘Hannibal Lecter’ stories for the most part leave out the gruesome details, and do have a lot of character depth and insight.

If this is Interzone’s attempt to keep up with the likes of The 3rd Alternative, then they have missed the mark by a long way!

Kaysen and Meaney provide the pick of the bunch. Another double-month on the cover, which sees Interzone almost getting current in terms of dating for publication.