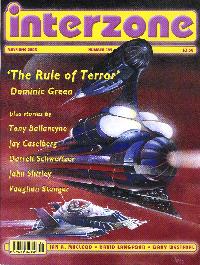 Dominic Green. The Rule of Terror.

Green returns to the type of near future, dark, blackly comic dystopian England of his ‘Queen of Hearts’ from Interzone 173. England no longer has a monarchy, its own currency, nor drives on the left of the road, and Segway are a preferred mode of transport – was that twanging the sound of my suspension of disbelief being stretched beyond its breaking point? ;-)

The story starts with a bang. Or more precisely, a splat, as Luc and Jean-Baptiste capture on film a suicide jump. These ‘jumpers’ are a quite commonplace political statement, but footage of them can earn a few bucks for the prurient televisual masses.

Journalist Luc is slipped a strange antique artefact – a floppy disk. The contents? A strange piece of source code from the Demos project (aside: Demos is a left-of-centre ‘think tank’ which favours the current Blairite government). Things begin to take a turn for the worse – a low yield nuke going off being a bit of a downer, it has to be said.

It transpires that the world’s remaining dictatorships are joining together to defend themselves against the ‘democracies’, led by that most long-standing dictatorship – the Catholic Church.

An enjoyable romp, particularly for those with a warped sense of humour sufficiently familiar with Britain and British politics to pick up all the references.

Vaughan Stanger. A Walk in the Woods.

Initially, an idyllic pastoral contrast. However, the woods in which Vincent Cornell is working are in fact enhanced by VR, and web-linked to help in the struggle to keep the biodiversity going.

Stanger rather, to my mind, tries to hit a couple of targets, and succeeds in hitting neither. The initial setting, of an English wood under threat, with technology coming to the aid, is intriguing, but that is rather left behind when Cornell meets a young woman in the woods.

Instantly intrigued by the woman, Rachael, we see their relationship begin to blossom. However the love is destined not to reach fruition, due to Rachael’s terminal illness. This leads to the crux of the story, in which Vincent has to find a workaround that will enable her to have a final, albeit virtual, walk in the woods.

Which of course he does.

Rachael’s introduction to the story, with almost immediate coughing of blood into a handkerchief is somewhat too obvious, and a short appearance by her identical twin sister jars a little. None of the characters really are ‘characters’ as such, but are simply there to progress the story.

In contract, Shirley starts of with a very believable pair of characters. Colin and Tanlee are in the kitchen at work, sharing their experiences of some strange events – they both believed that they had been dreaming a strange sensation of the world shaking. But if they both have been experiencing this sensation, it must be real.

After a couple of pages of setting up the story, Shirley then appears to want to set some kind of record for ending the world. Forget Greg Bear’s ‘The Forge of God’, which took a few hundred pages to build up to its climactic ending – Shirley gets us there in a couple of pages, having the dictatorial employer Mrs Koyne breeze through the kitchen explaining why everything is happening in a manner that would befit the hammiest Bond villian.

Colin and Tanlee find themselves on the roof of the building as the eponymous screw does that – screw into the Earth’s mantle, causing the city around it to gradually pick up speed as it revolves around the screw.

The breathtaking blockbuster style bravura ending has to overcome the use of the word ‘ineffably’ which doesn’t appear very often in SF. I recall seeing it used in an Emmanuelle novel once, not unlike Shirley’s ‘ineffably gigantic screw’.

Having been one of the ‘CyberPunk’ movement in the 80s, this would appear to be Shirley’s application to join the New Weird.

Darrell Schweitzer. The Most Beautiful Dead Woman in the World.

A strange, memorably strange setting. Offloaded onto dockside are the latest shipment of the dead. The townsfolk arrive, as they do, to take a corpse back to their home, for rather than being buried, these corpses are stored, stacked or displayed around the town.

The Offical whose job it is to oversee this task, a job handed down the generations, commits the most heinous of crimes in taking to his heart a woman whose beauty has continued into death.

Schweitzer paints a memorable picture, with the bicorn-hatted official, the other members of the community – referred to in the format of ‘J_____ the taximan’, giving the story a feeling of having been written long ago.

Tony Ballantyne. The Waters of Meribah.

A weirdly off-the-wall story, that also catches the imagination. Ballantyne launches into a story in which a convicted rapist is having a pair of alien feet in effect transplanted over his own. The very strange, constrained setting, with humanity evidently limited to a number of floors of a city-sze building, is an inventive one. The lack of sympathy for the protagonist, Buddy Joe (white trash) is of course limited. However, as the story unfolds, and Buddy Joe’s alienation increases (literally!) we find out more – his crime was a mental rape : challenging someone with questions and ideas!

Similarly, an intriguing setting – a massive spaceship, crashed generations ago, is being picked over by humans making a subsistence living. Others, the Cloud Walkers, are freer, and swoop on those who are planetbound.

The story suffers a little by discontinuity – it starts with ‘The Cloud Walkers were back again today’. Then a few paragraphs later wer are told ‘That was before Aldandro’. And then we get the Aldandro backstory, partly told in retrospect, then come up to date. But the end of the story should in that case marry with the beginning of the story. (If you get my drift). But is doesn’t.

An interesting idea, but needing more work on it.

All in all a damn fine issue. The double-month naming (third time of late) is yet to succeed in getting the magazine back on track!