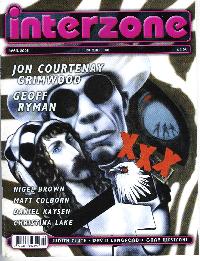 A special issue in that it has been edited by Paul Brazier, whose magazine SF Nexus was incorporated into Interzone some time ago.

Ryman rarely fails to impress with his short fiction. Here we follow a gay man from his sixteenth birthday, when he is accidentally outed to his mother, through key periods in his life. His mother is a NeoChristian, and the tide is turning against homosexuals now that parents can effectively screen the gay gene out of embryos. We follow him through the major love affair of his life, into his actually carrying a baby. The technology has enabled men to carry foetuses in the small bowel – not without risk, but certainly without women. The story ends with a rapid mention of the myth of male pregnancy going back into history, which seems a bit unnecessary.

I’m not the greatest fan of stories which leap a decade at a time – it feels as if the author has cheated a little and taken the easy option, rather than trying to build a coherent and chronologically contained narrative, with the use of flashback as (and if) necessary.

An interesting story, but it did feel as if it could have been worked on more.

An all too-believable near future. A group of elders in a less than wonderful care home have the added burden of having to pay their fees through the harvesting of any bits of their anatomy that have any kind of market value. Eloise is faced with giving up her hi-tech Internet-connected good eye, and is resigned to a much less visually rich life. However, whilst visiting the clinic where the op will take place she meets a robot clerk who has at the heart of its AI the chip that powered the dolly she had as a child.

The story manages to avoid being too sentimental, partly due to the very, very black nature of the story. Eloise hatches a plan with the robot to make her escape. There is some nail-biting tension as the aged Eloise, carrying the doll which she has saved, with the AI re-inserted in its original home, trying to get onto the local bus that will whisk her away to a better future.

Brighton Pier is the backdrop to this story, which it is explained, has been dusted off after some years in order to get into print before the real Brighton Pier crumbles into history.

A short, strange story, involving the seal-men denizens of the sea, and some equally strange shore-dwellers.

A mainstream story, in which the lives and loves of a small group of people are explored, and nothing really happens. Maybe I missed a bit that had an sfnal element, but I don’t think so.

A so-so story. Scientists in England cloning woolly mammoths from DNA find that old tales about the dangers of meddling with the mammoths hold truth. A bull mammoth appears mystically to vent its anger against those playing with nature.

I’ve not read any of Grimwood’s novels, but may well remedy that after reading this rare short story. Set in the same milieu as his longer works, we see the future through the eyes of a rich, super-rich, criminal. Facing a challenging assignment – someone living in an orbiting satellite – Mr Moukef has himself, or a copy of himself, placed in the mind of a young toy-boy who is being shipped out to the orbiting craft to satisfy the lady in question. Having fulfilled that requirement, the part of him which is Moukef despatches her. Returning to a newly-‘podded’ body, Moukef comes face to face with his earlier self. And in the same way that Moukef’s wife changes bodies on a regular basis, the better to remain young, the hit-man retires himself. The story is intriguing, and leaves you wanting to find out more about the setting.

Worringly for the regular Interzone editorial team, this is the best IZ for some time! Ryman, Brown and Grimwood deliver some top quality stuff, Lake, Kaysen and Colborn somewhat less so.