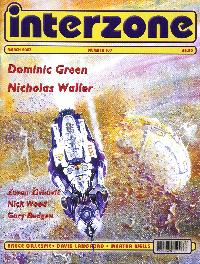 Lin Adenuka arrives on planet 48-274C, known locally as ‘Churned’. He is on Arbiter business, and the small team of scientists terraforming the planet have every reason to be worried, as he is investigating what he believes to be a murder, and not an accident, as their ‘accident’ report suggested.

A beginning which promises more than it delivers – perhaps due to the echoes of Cordwaier Smith stories in which Lords of the Instrumentality descend from on high to dispense their justice.

Adenuka’s investigations go according to Crime Solving 101, with classic lines such as “I’ll be the judge of what is relevant!”, and in the middle of an interview suddenly slamming his fist on the table and dramatically challenging the interviewee : “So when did you suspect…”

As the investigations progress, a Bigger Picture is revealed. Rather awkwardly, we find that Adenuka has been in on this Big Picture all along, although in spite of he being the POV character this is news to us. It transpires that the threat to the terraforming operation of finding remnants of intelligent alien life is such that the otherwise agreeable Adenuka happily blows the head off one of the scientists.

Anyway, in the last couple of paras his AI lifts his ship off the planet without him, and those higher up the food chain destroy him and the evidence of the alien life ‘to tiny bits of dust’.

Zoran Zivkovic. Disorder in the Head.

Yet another short Serbian tale. A rather unpleasant school mistress gets her come-uppance when a young pupil’s claim to be able to dream her classmate’s dreams appears to threaten her reality.

Nick Wood. God in the Box.

A small-press writer, with what you would probably identify as a small-press story : short, neat and fine as far as it goes. A psychologist struggling with relationships with her husband and teenage son is called in to investigate individuals who claim to have found God …. in a meteorite fragment. Are they bonkers, or…

Gary Budgen. Down in the Garden of England.

A first published story, and one that holds some promise. Budgen creates a strange future-Kent. This rural part of South East England has returned to feudal times, and despite of (or because of ) the hi-tech, it retains a dark, brooding quality. The rich landowner who has been carrying out genetic experiments with ‘volunteers’, a High Programmer from ‘The Polity’ who is seeking her grandson as her juve-therapy begins to wear off, and a travelling circus troupe prove an interesting backdrop, although somewhat redolent of 1960s British SF TV drama.

The main concern for me is that the story could have done with being much longer, the better to draw out the characters and the background.

Green is an author whose stories tend to be either big ‘hits’ or big ‘misses’ for me. This is a bit of a ‘miss’ I’m afraid. Some fairly dense science behind a sort-of locked room mystery, with the science springing up at regular intervals the better to create twists and turns. Or is he pastiche-ing Analog?

For me the Budgen story was sufficiently different to lift an otherwise so-so issue.