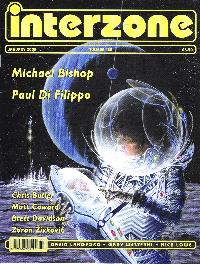 A Charles Stross story from early 2000 (‘Bear Trap’) had a punning conclusion to a far-future information commodity trader yarn. Here di Filippo has a nearer future scenario, in which the world’s financial and information markets are managed by an intriguing and delectable babe. (No surprises there, PDF!)

The babe in question has, however, to keep her emotions under tight control, as that would threaten the stability of the markets. When her control is compromised by terrorists, a nervous journalist is on hand to … well, let us just say that he is on hand.

Mat Coward. By Hand or by Brain.

Interzone regular Coward postulates a near-future call-centre hell, in which workers are virtually drones, their every movement (literally!) overseen and monitored. A situation rapidly escalates to industrial action, and the evil bitch employer finds that she has more than met her match.

Not a Brighton-based writer, as a number of Interzone writers are, but a Hove-based writer. (For US writers – for Brighton and Hove read Minneapolis and St Paul)

Butler sets up a problem – intelligent mines which have to be cleared to allow an army to pass. Those clearing the mines are stuck until one chap has a bright idea. Problem solved. Story ends.

Zoran Zivkovic. Line on the Palm.

A palm-reader ponders the nature of Fate.

Some very strange goings-on in the growth of Cicada & Associates to Cicada Inc., with the power behind the throne being a very feisty lady indeedy.

A very mediocre piece of writing from a member of the Interzone team and his wife.

A share-crop story, not the first to appear in Interzone, from William Hope Hodgson’s ‘unique far future masterpiece’ (their words) ‘The Night Land’. Interzone assistant editor Andy Robertson is big on this kind of thing. I’m not.

Interzone feels a little stuck in a rut for me at the moment. They have a small group of writers who provide a lot of the fiction, and I get a feeling of complacency – sticking with a tried and tested formula.