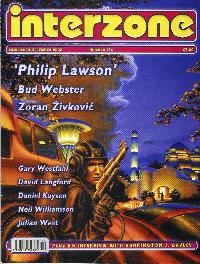 For the second time in 2002 Interzone gives an issue a double-month attribution in an attempt to get its cover date in line with those magazines which date their issues a couple of months ahead.

Philip Lawson (Michael Bishop and Paul Di Filippo). ‘We’re All in this Alone’.

Lawson is the pseudonym used by Bishop and Filippo for two ‘amusing crime novels’. I’m certainly not going to bash the Bishop/Di Filippo combo for writing such fiction, as it all helps in paying the bills and enabling them to write high quality SF.

But call me a pedantic old buffer (US: asshole) if you like, but I’m not sure what a an amusing crime story (albeit with a supernatural element) is doing in a ‘science fiction and fantasy’ magazine. Heigh ho.

This Brighton(home of Interzone)-based writer’s first published story ‘The Eight-Moon Dollar’ appeared in IZ #178 in April 2002. I noted it was a ‘tad unclear’, and the story doesn’t stick in the mind. This is a bit surprising as that story evidently shares the same ‘Planet Management’ background as this, much better, story.

An American bar is the setting, with a small clientele variously drinking to forget. Nothing out of the ordinary there, except that the sports that they would normally be watching is now off the menu as the professional sports are being managed by aliens, who have taken on responsibility for ‘Planet Management’. The story quickly kicks into top gear as they hear on the police radio which they are picking up on a scanner, that someone is heading their way. A rogue alien?

The local cops shoot the fleeing person as she enters the bar, but are ordered to clear out by the Plan Man aliens, who are going to send in a crack team to retrieve the fugitive.

My only real criticism of the story is that it should be longer – the rest of the story unfolds quickly, and surprisingly. The nature of the fugitive, and the Plan Man ‘alien’ who turns up are handled well. The potential moral dilemma and dramatic tension between the main protagonist, (a sister whose brother died a while back), and the Plan Man agent (said brother, who is in a form of purgatory from which he can escape back to ‘real life’ but only by killing someone else, and that someone could be his sister) could have been played out at greater length.

All in all, a pretty damn fine story for a new writer.

Zorzan Zivkovic. Hole in the Wall.

Interzone has been featuring these shortish stories for some time. I’m obviously missing something, as very few of the stories do much for me. To my mind a mid-list writer could churn out one of these story out a day.

The winning entry in the latest James White Award for short stories by unpublished writers. A timely piece on the basis of recent art ‘contoversies’ over here in the UK of late (carrying out an autopsy as ‘art’; copying and enlarging a children’s human anatomy model as ‘art’; a room with a flickering light bulb as ‘art’; slicing dead animinals in two and displaying the halves as ‘art’; plasticising human cadavers as ‘art’; displaying your unmade bed as ‘art’) and the media/public obsession in reality TV.

Timely, although the story suffers in exactly the same way as a previous White winner – when reviewing Mark Dunn’s ‘Think Tank’, published in IZ #162, Dec 2002, I noted for that story : “It reads like a story by a new writer, with little dialogue or action and perhaps overmuch wry description by the protagonist”. And that quote, with the exception of the word ‘wry’ is the same for this story.

Interesting to compare it to Jason Wittman’s first published story ‘On Bookstores, Burners and Origami’, which appeared in SCI FICTION in November, and which I reviewed on a positive note here

A First World War tale, in which a small platoon of soldiers have, by dint of keeping their CO locked up, ensured by some strange force, to have saved themselves from otherwise certain death.

A strange read this as a number of things came together: I’d recently listened several times to the bluegrass classic ‘Big Rock Candy Mountain’ which is a hobos-view of life; read (and have stuck in my mind) Lucius Shepard’s ‘Over Yonder’ novella from SCI FICTION in Jan 2002 in which a hobo takes a train to a very strange place; and have recently readi a couple of interviews with Shepard in which his early years are encountered.

In this story a young man with a yearning to be a musician has a certain ‘something’ missing from himself, and joins a hobo on a very strange railroad journey in which he discovers that very inner self/shadow.

The story is redolent of Shepard and Gene Wolfe, which is no mean feat, and due to the aforementioned, I’m sure I’m going to remember this as a Shepard story in the future! (I almost neglected to mention that the travelling companion is one Joshua Abraham Norton, a ‘real-life’ American of eccentric persuasion).

The quality of the reviews always makes up for whatever weaknesses may appear in the fiction in any particular issue of Interzone, although this month praise to Kaysen and Webster for their stories.