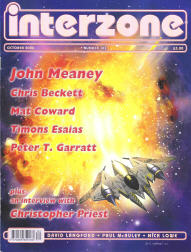 John Meaney. The Whisper of Discs.

A well written and evocative piece, of longer length, which the story deserves.

The final days of a very elderly, wealthy and successful IT businesswomen are interspersed with memories of her life, and also with a forebear – for she is a descendant of Ada, Lady Lovelace, she of the laudanum, computing expertise, and Byronic tendencies.

The young Augusta Medora de Lauron was a mathematical and scientific prodigy, and despite her difficult upbringing, she is able to play a leading role in developing technologies that will finally offer humanity the chance to escape our shackles. Deserving of a larger audience.

Third issue in a row for Coward, and a third story in a row, and similarly likely to appeal more to British readers. A knock on unremarkable door in the seaside town of Brighton at 4:30 a.m. heralds a curious request for emigration. The New Yorker on the doorstep insists that he wants to emigrate to Planet9Gamma, and that the Embassy staff within process his application.

This they regretfully do, after a fashion. The grass is always greener….

A short, darkly humorous take on celebrity and the modern media. Within the space of a few minutes a pretty ordinary Joe is boosted to global celebrity status, then viciously chewed up and spat out by the media machine.

Beckett is a regular contributor to Interzone (as many who write for Interzone are), many of his stories being set in a fairly bleak nearfuture welfare state in England. This story isn’t in that milieu, which is fine by me, as I tend to prefer these other stories.

Here we have a thoughtful piece in which a a wealthy art gallery owner becomes engrossed with her new executive toy – an AI which acts as a butler/personal assistant. Her relationship with her younger lover suffers, but finally she senses the bleak vacuity of the new relationship.

Another dig at the media – in this case the British tabloid press, which names only slightly changed to protect the guilty. The ‘story’ is told through newspaper clippings of a tabloidical nature, and emails to and from members of a scientific mission into the Amazon. The mixed format of excerpts wasn’t much to my liking, and I have a particular thing about the fictional use of memos/letters/emails to move a story along, especially when they end up quite lengthy and include dialogue, and palpably not like really letters/emails/memos.

Quite a satisfactory collection – although non-Brits won’t get the full benefit of several of the stories.