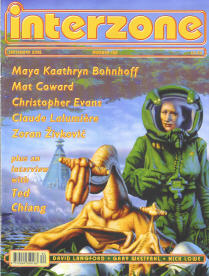 A somewhat downbeat, peculiarly British take on time-travelling (not unlike last month’s story about an alien visitor to Earth, who finds his release into the wider community is somewhat low-key).

Here, Rupert, going through a mid-life crisis, runs a ‘greasy spoon’ cafeteria in central London, which is a front for a hotel which hosts travellers from the future, visiting through the aegis of the British civil service.

Rupert becomes convinced that one regular visitor is moving in on his signficant other, and steels himself to dispatch the philanderer. Fortunately he comes to his senses in time.

A weekend ‘team-building’ exercise goes from bad to worse. With ‘down-sizing’ on the horizon, the company employees on this compulsory exercise have to face up to themselves and their future. The guru running the weekend is a crew-cut sergeant major type, rather than a pony-tailed bearded type, and his methods are somewhat … different.

Claude Lalumiere. A Place Where Nothing Ever Happens.

Kyle has not been having a good time of it of late. His father died a while ago, and now his Uncle, who took on his late brother’s fathering role, has died.

Somewhat at a loss, Kyle’s life takes a turn for the better when he starts dating a very attractive babe in his workplace.

Things take a surreal turn, when Old Nick strikes a deal with a cellphone company, and those in Hell (there is no heaven) can ring up those they have left behind.

Kyle initially welcomes the chance to chat to his dad and uncle, but it soon becomes a drag as they are never off the phone.

Fortunately the business deal collapses, and communication is ended.

Zoran Zivkovic. Geese in the Mist.

Yet another whimsical tale. This one does not even have the reedeming quality of having something happend (other than some spilt tomato ketchup and a broken fingernail).

In the September Analog, Pat Forde used an sfnal device (‘deep projection’) to confront a September 11th bomber with the true horror of his crimes. Having seen the impact of his crimes, the terrorist has a change of heart. When I reviewed the story I indicated that I was far from convinced.

One objection I had with the Forde story was that it signally avoided the motivations behind the terrorist act. In this story Bohnhoff does at least attempt to get into the mind of an IRA bomber, who is able to face up to the fact that his actions have led to ‘innocent’ victims, including women and children, dying horrible deaths.

However, the ‘Zagorsky Process’ is an alternative to execution. The bomber takes this option (martyrdom by execution would have been the more likely choice of his IMHO), and he goes through the procedure, which enables him to see the results of his actions through the eyes of others. And of course he is a changed man, seeking forgiveness for his sins.

Confronted with the horrors of his action, execution becomes a desirable alternative. However, after receiving his lethal injection, he finds his suffering is not over.

The tone and content of the stories this month is somewhat downbeat. The Evans story is the most substantial, and the Lalumiere story engaging. But that’s about it, fiction-wise IMHO.