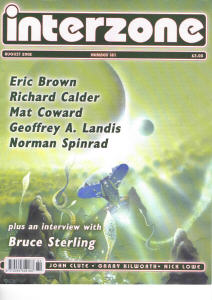 A very peculiarly British take on Roswell visitors. Having been held in utmost secrecy for decades, the aliens are being quietly released into society. A short, balding ‘Mr. Easter’ is freed to integrate into a society where people whilst they have little belief, similarly have little disbelief. Initially Eastern is located in a residential care home for older people, notable for its dietary regime, which ‘promotes defecation’. Captain Trowbridge, a military man with a gap in his past, is the other part of this very Odd Couple.

A desperate mission to safeguard the future of humanity has seen ‘uploaded’ human intelligences traverses the unfathomably long distance to a potentially life-supporting planet.

Upon arriving at the destination, the ship’s AI struggles to understand what the attraction of the planet is, and the logic of landing on the inhospitable surface. The ‘meatware’ is then downloaded, and a more human approach to life is resumed.

The story intersperses the ship’s AI musings with the virtual ramblings of philosophers and others from humanity’s past – this latter stream being less successful than the first.

Slightly shorter than Calder’s recent offerings, set in the same milieu. The hero wielding a huge sword (!) features once again, as he faces the Darkness which is enveloping the country.

Continued from the previous issue. A scientific romance in the style of Wells/Verne etc., in which Cranley Grange is the setting for a mysterious nocturnal glow. Magazine editor Carnegie, his brother, and two authors investigate said activity, and find themselves with a tantalising view through to … another Universe?

They come fact to face with a visitor from the alien world, who is evidently mortally injured. However, with a little medical assistance, the aliens own recuperative powers soon have him ready to continue his fight against oppression. Carnegie follows him into the portal, and, just as the story gets going, it ends.

I was thoroughly enjoying the story and was somewhat taken aback by its ending. Dashed bad show.

A good collection of stories, with only Old Tingo’s Penis failing to stand up to inspection.