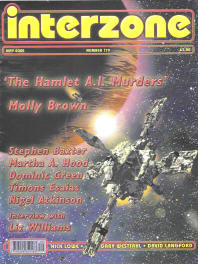 A rather missed opportunity. A subtle tale of a murdered brother returning from the grave via an uploaded AI could have been wrought, with clever pointers to Shakespeare’s ‘Hamlet’ throughout.

Instead Molly Brown simply goes for an updating, complete with character names, plot ‘twists’ and so forth from the original. As such this reader simply plodded his way through waiting for the obvious scenes and obvious denouement.

A short piece, but inventive while it lasts. The Assimilation is sweeping the galaxy, determining the fate of whole worlds. The existence of intelligent, native life is a key to whether a planet will survive. A unique trio of gravitionally-locked planets has a mould-like form which may be intelligent, may or may not be native, or which may in fact have a signficance in inverse proportion to its humble appearance.

Nigel Atkinson. An Exhalation of Butterflies.

Set against the background of William Hope Hodgson’s 1912 novel ‘Night Land’, which would presumably make this story either ‘fan-fiction’ or ‘sharecrop’. I didn’t get far last year with a story in this milieu written by IZ co-editor Andy Robertson, but read this one through.

Not being familiar with the original source, it is of course impossible to estimate how much of this story is entirely the creation of Atkinson. For the sake of this review I will treat the story as a singleton, and say that it offers an interesting vignette of a very peculiar, and only hinted-at, farfuture? setting. An elderly lepidopterist spends some time with a young child, who reminds him of his own long-lost son. The story concludes with a dramatic happening in the semi-steampunk setting, and the long-separated son’s travails are revealed – many butterflies will die in the attempt to reach a higher plane.

A quite charming tale. Shades of far-future steampunk in the quasi-Victorian setting. It is carefully revealed that the AIs in charge see humanity as a dangerous creature, and so the individual representatives of humanity have perforce to be kept apart. Osmund catches the merest glimpse of a person of the female persuasion, which gives pause to all manner of thoughts in his head.

Martha A. Hood. The Scratchings on the Wall.

The Olwon have been on Earth for some time, studying us. A mother struggles with the bizarre alien incursions into her domestic life, and has to face their demands for closer contact, the better to understand us.

A diary format story, which tend not to be well received by yours truly. But in this case Green comes up trumps. The diarist is a young boy, whose speling (sic) and outlook on life is reminscent of one Nigel Molesworth of St. Custards (a skoolboy from the 50s, as any fule kno). There are too many references to contemporary British culture throughout for you to spot on first reading, and for the non-Brits the vast majority will go by unnoticed.

The habitat in which the young boy lives becomes a warzone, and it is Uncle Dave and his Reliant Robin who save the day.

I enjoyed it hugely. Others will doubtless be completely at a loss.

The opener by Brown is a bit of a disappointment, but the following five stories are all well written and entertaining.