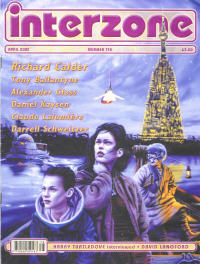 Calder has appeared in several issues of Interzone over the past couple of years, with his lengthy, and dense, and enjoyable ‘Lord Soho’ fantasy stories. In this, we are told, Calder is turning his hand to what the editors call ‘space fiction’.

It is clear that Calder is slightly less than comfortable in the hi-tech, far future enviroment in which he sets the story. He makes a reasonable attempt at handling the nano and virtual technology, although I couldn’t work out if he was being a bit steampunkish in referring to the AI keeping the main character in cryo suspension through her ‘expertise in glucose and electrolyte regulation’, or was just plain awkward with the theory.

De Cruz comes out of his sensual virtual existence to rescue a pan-dimensional being who seeks refuge in our universe in the shapely form of a beautiful woman. But for De Cruz the future he wishes is as virtual as the world he inhabits.

Alexander Glass. The Ghost in the Valley.

A short-ish story, somewhat less convincing that some of his recent stories. The story is as insubstantial as the setting – a murky wood in which two perspectives are given, in each of which the protagonist has a vague, glimpse into their world many millenia separated from their own.

First fiction sale for another Brighton-based writer. Near future media-gone-mad story, which is a tad unclear in its telling of potential blackmail and shenanigens in suburbia – rather too much dialogue and too little exposition.

Another first fiction sale for critic and editor Lalumiere. As with the previous story, it is fine as far as it goes, but it isn’t really to clear to me as to where or why it is going to where it does go. Mythological shenanigens in this case, with two people whose lives in the real world have been less than beautiful, finding themselves together in a bookshop which offers them a better, if somewhat alternative, future.

In contrast, a story which is palpably written by somewhat who is not half bad at writing short stories. An evocative piece, slightly alternative history-ish, in that immediately post WWII the British armed forces scientists are working on a robot, and an English rose is brought into to (not unsurprisingly, based on the title) teach the war robot to dance.

Darrell Schweitzer. Envy, the Gardens of Ynath, and the Sin of Cain.

A young man is brought under the spell of another, who becomes a messianic guru offering…

The mysteries are finally revealed at the end, in which the acolyte confronts the truth.

A pretty weak issue, to be frank, with only the Ballantyne story really engaging my interest.