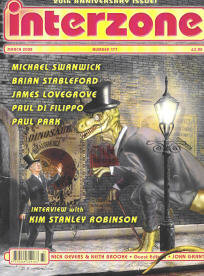 A 20th Anniversary issue, with Guest Editors Nick Gevers and Keith Brooke of the InfinityPlus website.

Swanwick at his gently humorous best, with five alternate-takes on dinosaurs and Victorian England, including a quite civilized chap (as illustrated) who finds the base characterizations of his species quite beyond the pale. Top hole.

Paul Park. If Lions Could Speak: Imagining the Alien.

The author has a quasi-autobiographical philosophical muse on the difficulties in taking an alien perspective.

Mark Roberts and Neil Williamson. Sins of the Father.

A jungle denoument, almost of Lucius Shepard milieu, in which a son has followed a trail which has led him to a heightened state of consciousness amid the steaming fronds. Is the darkness from which he has escaped an external or internal darkness?

Paul Di Filippo. What Goes Up A Chimney? Smoke!

As with Swanwick’s story, a slightly skewed take on scientific experimentation in which mice are being used to explore quantum telepathy. (Presumably Prof Schrodinger’s cat is safely locked up to prevent it chasing them).

Faced with a boss out to get him, Josh finds a solution to the threat of the plug being pulled on his experiments in the shapely shape of twin sisters living nearby. If he can only….

His experiment succeeds beyond his wildest dreams (perhaps living up to his wildest dreams!) as the twins thought-processes do work together, and the power that they thus have is put to good use (and in specific areas).

And they all live happily ever after. (Hmm, in the excellent ‘Babylon Sisters’ in Interzone last year, there were chimeric sisters whom provided an -ahem- ‘love interest’. In wonder just how deep this fascination for troilism goes with the author?)

A turn of the century horror story in which a carpet from the Indies does indeed prove to offer special powers to work with the dreams of the owner. But as you might expect, there is a price to pay.

A mirror-image: mechanical beings surrounded by organic furniture, buildings and so forth. The latest craze: an organic ‘head’ with eyes, nose, mouth and lungs. Whatever next!

An entertaining collection, if slightly lightweight due to the tone of three of the stories. Swanwick and Di Filippo are amusing, and Stableford and Lovegrove are well done without being exceptional, and the other stories are so-so.