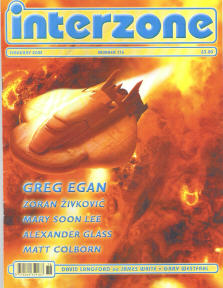 I have to admit disappointment with this story. I approached it with egaer anticipation – a lengthy story (which Interzone provide only too rarely) and one from Greg Egan at that!

Egan looks at the quantum nature of life from a slightly different perspective – that of choices made, and actions taken or not taken. A young Australian decides to defend a stranger being beaten up, and in doing so sets his life off onto a different path to that which he was taking, due to now being confident enough to approach an attractive colleague.

The story, which is episodic, jumps a decade. Returning from a project which is attempting to cleanse radioactive contaminated desert in Iraq to find his wife is pregnant. The bad news: she miscarries. During this segment the issue of Many Worlds is raised, and an one too subtle dig in the ribs of cheesy Alternate History stories is made.

Eight years on: some technicals tuff about quantum effects playing a role in consciousness is provided, as the protagonist begins his work on the Qusp – a quantum singleton processor. This gets a little Schrodinger Cat-ty for me – a debate about whether a computer can run in parallel different programs without knowing about it blah blah. Alongside this the couple consider raising an AI child.

Nine years on: the QUSP research has moved on, to encompass white mice (meeses), anbd the decision is made.

Two years on: the child is ‘delivered’. Somewhat bizarrely the AI is placed in a babies body, as opposed to being a purely software construct.

Ten years on: the child is now 10 and public opposition to such children is mounting.

Nine years on: the daughter is now a young woman but has run away from home. In searching for her the parents are tracking fetishists who have a ‘thing’ about having sex with such AI/prosthetic ‘humans’ (they appear to all intents and purposes human, so I’m not sure what the attraction would be!) The abscondee is found and returned to the family bosom.

A curious story IMHO – it felt almost like work done towards a novel, with the structure and key passages done. The several episodes didn’t really work for me, and an author as good as Egan could have found some mechanism for handling the concepts in something other than strictly chronological.

The final in this current mini-series of linked storyettes. Music has been a feature in previous stories, and here we have a master violin maker who is defenestrated several stories high. Did he jump or was he pushed.

Characters from previous stories mysteriously appear, but we are left none the wiser.

A colonisation shape is on its two millenia journey to find another planet, fleeing from something on Earth – the Adversary.

Woken to do his 1-year maintenance stine, Eduardo feels the Adversary within the ship. Is one of the sleepers harbouring the Adversary?

Another beach-related story (the editors could have separated the stories either in the same issue or across a couple of issues!).

Here Brighton, home of Interzone, is the scene. Australian aboriginal dreamtime comes to the pebbled beaches, as the world is drained of water by the thirst frog Tiddalik.

A generally disappointing issue, as the Egan is a bit below par and the others are similarly not the authors best work.