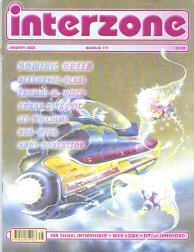 Non-genre story about two men who get in above their depth. They find out that dolphins are not quite as friendly as they are made out to be.

Glass is a young British author who has produced some good stories to date. Here is his take on the issue of Alzheimers, which has been covered by others of late. Technological constructs enable the human memory to be mapped and storied, but for Carol this technology comes to late, as her husband is failing fast from Alzheimbers. Or is it too late? Can she take on a construct of his failing memory and live with it, keeping him alive beyond his physical death.

Another single pager about the far future goddess Rwng.

An ageing professor on his hospital death-bed is visited by violin music which transports him, not to the music of the spheres, but to his childhood and to the achingly beautiful sound of a master violinist at work in a high garret. His is almost able to grasp the ungraspable, comprehend the uncomprehenable, bare the cloaked mysteries of life. Can he manage to convey his knowledge before his last breath?

Another story from IZ regular. In remote rural Tashkent the local villagers take a major risk in defying the authorities in order to plant seed which has not been GM-ed by the west to produce only one harvest.

A new girlfriend with a metaphysical bent proves challenging to the protagonist. Can he change his ways to keep the relationship going. If not, will the relationship fade away, as if it never happened……

I got a few pages into this story, a strange far-future story, and then rather belatedly put two and two together. The other part of this equation being the cheesy full back cover advert for a website offering monies for stories set in William Hope Hodgson’s ‘classic Entropic Romance’ ‘The Night Land’. Sure enough there had been a quote from said book at the beginning of the story, and the author credit at the end points out that the author, Andy Robertson, is a co-editor of IZ and is behind the web site in question.

Not being at all keen on sharecrops I baled out of the story at that point.

The final story, the Hodgson sharecrop is the longest story by far, which is a shame IMHO as I would rather have seen the Williams or Webb stories at greater length