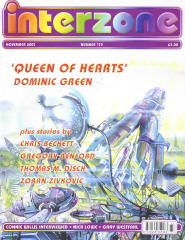 A couple of years ago Green’s ‘That Thing Over There’ (Interzone #132) was picked by Hartwell for his annual Years Best, and last year’s Xmas jolly ‘Rude Elves’ (Interzone 162) and ‘Grass’ earlier this year (Interzone 168), all appealed to me.

Surprisingly then, I gave up on this story halfway through, for the simple reason I found it quite unpalatable. ‘Queen of Hearts’ posits England a few years hence, in a society in which Princess Di was left comatose from the car crash in Paris, and not dead. The monarchy is clinging onto power by chemically ensuring the young Princes William and Harry do not reach maturity.

England is in a state of near-anarchy, and ‘political correctness’ and current concerns about paedophilia and other moral panics (including the ‘all men are rapists’ view) are taken to an extreme. To my taste Green goes simply too far to the extreme – whether he has gone too far in satirical terms, or is being ultra-ironic, I’m not sure, but some of the language appears to be deliberately extreme for no other reason than to push the limits.

A small American town is reeling from a disaster in which a sizeable proportion of the Jewish community perished in a synagogue fire. A young boy scout, himself deceased, has the job of persuading those unwilling to recognise their fate that it is indeed time to pass over to the other side.

In contrast to the preceding story, nicely understated.

Albert is shopping in a mall when a particulary forceful AI in the mall greets him like a long-lost friend. Indeed, the AI is recognising him as the first person it engaged with when it was commissioned, and the AI, taking a female identity and the name Ernestine, has in fact imprinted upon him.

The AI overrides his own personal AI systems and soon inveigles it/herself into his life. However, Albert’s bondage games with his girlfriend Rebecca intrigue the AI, and soon all manner of sexual naughtiness and relationship problems ensure.

Beckett is an Interzone regular, and this story follows last month’s story ‘Marcher’, in a near future England where the welfare state is rather more heavy handed than is the case now. In ‘Marcher’ Beckett introduced a new angle – ‘Shifters’ are individuals who are able to transfer between quantum parallel earths by the use of drugs. There isn’t any science to back this up, and vague references to Anglo-Saxon cults and the drugs (‘seeds’) being referred to ‘Schrodinger medicine’ rather fails to convince. Here we find the official from the Special Category Administration choosing to ‘shift’ with his lover, as part of a government attempt to share information with their parallel selves.

The couple are tragically separated, and Huw can find no comfort in this earth’s version of his mother, who is still alive.

As I mentioned in my review a day or two ago of the ‘Ant-Men of Tibet’, Beckett has been writing for Interzone for ten years and to me needs to be making a step up in his story-telling. His stories are fine as far as they go, but they need to go further!

A lady in snow-bound railway station has visited upon her by an organ-grinder the curse of forseeing in graphic detail the death of those she meets.

The Gregory Benford story was IMHO the only really worthwhile story this month, and to my mind neither Zivkovic nor Beckett really justify the number of stories from them which have been appearing in Interzone of late – perhaps the editors are getting just a tad complacent?