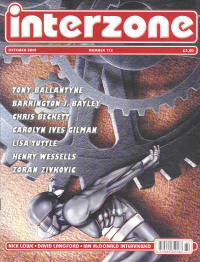 Lee Pao Nelson is a wealthy, successful businessman. But as is always the case, there are other wealthier, more successful businessmen. The bugbear for Lee is that he is not himself quoted on the Personality Exchange, a recognition of trend-setter status. Whilst pitching a World Church franchise (everything is commodified in this future!) he learns that he has finally achieved this status!

The only slight problem is the recently arranged evening rendezvous with a female ‘companion’ intended to round of his day. His newly acquired status could be compromised by such an assignation – can he buy himself out.

The story at this point is brought to a quick, not altogether satisfying conclusion with Lee at first believing he has found a life partner, only for that illusion to be shattered (literally). A lengthier ending, exploring more fully the moral vacuum in which Lee operates, would have been welcome.

The editorial refers to Bayley as being one of Britain’s ‘quirkiest SF writers’. I have to admit that none of his recent stories in Interzone have particularly engaged me, which is a bit strange as I tend to like well-done ‘quirkiness’.

Here we have a fairly standard SF species inversion trope (currently the remake of Planet of the Apes film adding little more to the body of work!) – in this case Earth has been invaded by gigantic chickens, who are now ruling the roost. (My pun!) Not gigantic chicken-like aliens, but evidently simply gigantic chickens. And instead of battery farming chickens, humanity is reduced to being battery farmed themselves, and sold in markets etc.

One battery cock is rescued from the dinner plate by a wild human woman, and they escape via the sewers into the countryside.

I’m not entirely sure what, if anything, BJB is trying to get across here? Humanity under alien rule has been done plenty of times before, and having battery farmed animals descend on Earth and do unto us as we have been doing unto them comes across as something a nine-year old vegetarian would put forward as an argument against eating chicken.

A curious kind of horror story, in which the potential gruesome ending is flagged up quite clearly in the opening, and the suspense is down to whether the woman forced into pregnancy is going to make the father of their child eat his words. Grimmer than the Brothers Grimm!

I personally have felt this series of stories as being rather heavy-handed and none-too subtle. As someone in the same line of work there are far more subtle, insidious futures than his cruel extension of Thatcher’s idea of a welfare state. In this story Beckett takes a quantum leap, as he adds to the current trough of quantum/parallel stories with visitors from alternate Midlands popping into existance. This of course does not please the authorities!

A double-whammy for Wessells unfortunately. Three days ago I posted a review of Analog’s December issue, and noted in reviewing Sean McMullen’s ‘Tower of Wings’ that his tale of a medieval lady experimenting with hang-gliding, using the conceit of diaries and archeological evidence, was close to Mary Gentle’s ‘Ash’ which I am currently reading.

Wessells’ story is set in 16thC Ireland, with the English invaders being repulsed by the innovative use of bamboo and linen kites, suspended under which people observe the progress of battles below.

Told in diary entry format, Wessells’ goose was cooked as soon as the story unfolded!

Humour me here – Zivkovic’s short short stories have appeared regulary in Interzone in the past couple of years. They are collections of themed stories, and are invariably well written and quite charming, but are single idea stories. One a year might be a nice change – but every couple of months?

I can forgive Interzone, if only for the fact that they don’t publish pomes.

It proves difficult to review these stories individually, so I will start a programme of gradually shortening my reviews to the smallest length possible. This month:

Widower buys music box which magically, but briefly, transports him to a vision of a Christmas Which Never Happened.

An AI and Internet gone far too far future. Marcus Westerby criticises the work of third world artisans. Their response is nuclear and targetted on Westerby. Saving himself from the guided missile proves difficult, and expensive.

Another solid issue. Nice cover. Copy which goes to print not too long before it is printed. Story quality OK. Review quality of the highest standards. Shame they don’t have a decent internet presence (http://www.sfsite.com/interzone).