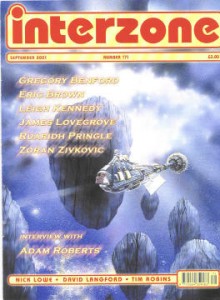 Shades of ‘Think Like a Dinosaur’, in that the Frankenberg Process is one which ‘translates’ copies of scientists off-Earth. However, the translation puts ‘copies’ of those scientists on planets far from Earth, leaving the originals to carry on.

In a militaristic future, Freeman (none too subtle a name!) has the opportunity to step up to Director of his magma production plant, the previous Director having passed secrets on to the East.

With promotion comes translation, and his copy is sent to Beta Hyrdi 5 aka Brightwell. ‘He’ finds life on the planet less than appealing, and becomes desperate to return home. Can his friend, Doug, offer a way back to Earth?

The ending sees Freeman come face to face with ‘himself’ – with the Earth/original Freeman guilty by association following the Brightwell/copy Freeman’s actions. Can one survive?

A rather melodramatic ending, but otherwise enjoyable without reaching the heights the issues in the story could have offered.

Post eco-disaster, with rising waters pushing a community further and further up the valley. The day to day drudgery is seen through the eyes of Colina, hurting from the death of her lover. Another man attempts to find a way to get close to her.

Nicely told vignette. although not really adding much to the body of literature on this topic.

The Serbian writer returns with another series of short stories. The previous sequence of his hinged around ‘impossible encounters’. This series revolves around ‘Seven Touches of Music’. So in this first one we have a woman with a dream/premonition in which music plays a part.

Alpha, Beta and Gamma undertake a challenge to create a world from basic elements. Their different approaches to creation have to struggle to succeed.

Neat satire on the Readers Digest mass-mailing horrors, with Nigel Cunliffe bombarded by AI-controlled ‘personalised’ sales pitches. Absolutely correct, down to the unfortunate mis-spelling from one ad in which he is referred to as Nigel Cuntliffe.

Pringle appears with another story in the same idiosyncratic vein as his previous story (Surfers, Interzone 164). Better than that first story, nanotech ‘megabug’ nastiness threatens Dr. Steadman, who undergoes the not particularly pleasant process of being disassembled atom by atom. However, the story continues after that point, and entertainingly so.