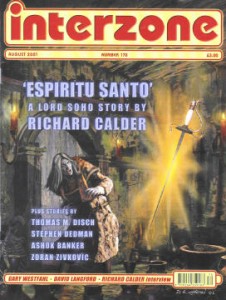 The final instalment of Calder’s telling of the multi-generational battle of the Lords of Soho against the perverse, both within humanity, and without, from the creatures of the dark depths.

This Lord Soho, descendant of the orginal octaroon (1/8th orc) is a hunchback and more orcish than his forebears. Despairing of humanity, he dashes himself, his wife and infant child to the stony ground below the battlement of his castle. But he falls further than that – an encounters the fabled, and eponymous, sword which holds the very soul of the family.

With echoes of a previous episode, Richard Pike, is condemned to death by Parliament, but escape the gallows. Fleeing to the front, in which the final war between humanity and the orcish hordes.

A fittingly grand finale to a lengthy investment by Interzone (slightly longer than anticipated, as they have intimated), and a series which, as evidenced by the letters pages, has divided readers into those who have enjoyed his Lord Soho stories, and those who have hated them. I am of course, in the former camp.

The interview with Calder which follows, disappoints, as the interviewer allows the author to avoid questions which would have opened up the content of the interview.

A short, short, with an MTV-style take on fashion, celebrity and omnipotent deities.

The tale of two halves somewhat perplexed me. The first part was a relatively straightforward xenostudy story in which travellers to a planet seek to try their ESP to make better contact with the planet’s life-form. A resident scientist resists (and resents) their intrusion.

The antagonism spills over into a dramatic finale, when the ESP powers of the woman surface the scientist’s guilty secret. The story races to a conclusion, with a sort of ‘twist-in-the-tale’ ending which is redolent of The Twilight Zone.

Extremely explicit and dark take on virtual prostitution, and a mother desperate to get the clients out of her mind. Humanity is moving towards One Hundred status – total virtuality.

It would be churlish of me to moan about Zivkovic’s regular appearances in Interzone, wouldn’t it? OK, so I’m churlish – bite me ;-)

Unlike Calder, Zivkovic’s stories are particularly short. Undoubtedly well written, they do, however, tend to have a single, simple idea. In this case, an autistic child appears to have special abilities when listening to certain music. (And that’s it!)