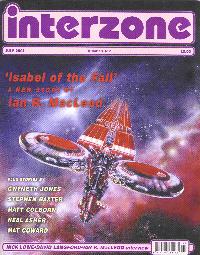 MacLeod has put together ten years’ worth of excellent short SF, many stories of which have rightly been selected to appear in a variety of Years Best collections. Favourites of mine from the past five years include ‘Starship Day’ (Asimovs, and subsequently Dozois’ 13th Annual Collection), ‘Nevermore’ (in ‘Dying for It’ and Dozois’ 15th), ‘The Summer Isles’ (Asimovs, and Dozois’ 16th), current Nebula nominee ‘The Chop Girl’ (Asimovs, Dec 1999), and ‘Chitty Bang Bang’ (Asimovs, June 2000). You can also find ‘New Light on the Drake Equation’ online at www.scifi.com/scifiction.

So with a track record of that strength you would expect something good, and (drum roll to heighten tension) in ‘Isabel of the Fall’ I can safely say that MacLeod has achieved and probably surpassed his usual high standards.

In a setting which will be featured in another Asimovs story shortly, MacLeod produces a richly woven fable on a planet (?) in which the sun’s rays are reflected into a valley by members of a religious order, blinded at birth, who are tied to the mirrors and sing the bringing of light to the valley. The society described is recovering from war, divided into religious groupings, and though a far-future society, is quite fundamental in its practices. For me as a librarian, the description of the work of the librarians, and the homage paid to the founding fathers (sic) of librarianship Dewey, Bliss and Ranganathan was a nice touch, although will likely be missed by most non-librarians!

The novella is surely a shoo-in for a Years Best collectee, and has to be up there as one of my top stories of the year. A lengthy interview of MacLeod by Nick Gevers follows, and my only criticism is the decision to put a photograph of the author in 1989 on the page after a current photo (the late 30s can be a cruel time – of this I can vouchsafe!)

I would say to anyone who has read and enjoyed his other stories – keep an eye open for this one.

A short story which is an ‘overture’ to a forthcoming novel. Very much on the cusp of the speculative/mainstream divide, the story is very much an appetizer and will doubtless give a good indication to the reader as to whether to read the novel.

Baxter returns to territory covered, to much better effect, in his ‘Moon Six’ story (Dozois 15th and online on the excellent InfinityPlus – astronauts on the moon come across …. an anomalous situation.

The footnote tells you that the story is based on an interview with Apollo astronaut Charlie Duke in which Duke related a vivid dream.

A second story in Interzone from a new author. A modern day diver finds himself caught up with a mythical figure who ended up in a watery grave. Nicely put together, and very much a horror story.

The Sea of Death. Neal Asher.

A bit confusing this – a nautical title (without a nautical setting) following a nautical story. Just the kind of thing to confuse me.

Another new-ish writer (can’t really call him young as he is 40) who furnishes an enjoyable deep space tale. The tried and trusted ‘journalist visiting a planet’ ploy is used (and many a more experienced writer will use this device) to describe a planet on which a bizarre multitude, deep-frozen alien sarcophogi are found. And from there on in you can guess where the story is headed – but it heads their quite effectively.

I particularly welcomed a most realistic First Contact reaction : “I know that if they come at us I will almost certainly shit my pants”.

A Time Travel tale, although with a slightly offbeat approach. Almost a 1950s style (British) Ealing Comedy film – you can imagine Peter Sellers playing several of the characters, or maybe Norman Wisdom playing it for laughs. (For US readers, perhaps a Marx Brothers/Abbott and Costello analogy).

Several of the standard Time Travel conundrums (conundrumi?) are giving a very thorough exploration, to a satisfying end.

Last month’s issue was a stonker (UK coll: excellent, very good), which was very much a difficult one to follow. The Ian R. MacLeod story is a standout, and the rest are in constrast quite so-so.