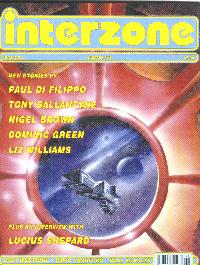 Classy stuff from Di Filippo in a well written (as you would expect) and nicely tongue in cheek hard SF romp very much in the style of UK(ish) writers Iain M. Banks and more latterly Alastair Reynolds. The son of a diplomat flees off-world, disorientated at the ease and speed at which he is able to find himself in an entirely different environment. He enters Babylon (by way of an organic sphincter!) and falls into the company of two chimeric babes who take him under their wings (this metaphor not entirely the most appropriate as they are more equine than avian). The pair are information pirates and…. – well you will just have to read the story itself. Most recommended, and just the right kind of humorous touch!

A ‘stand-along sequel’ to the similarly titled story from the previous issue. A somewhat different take, but with the drug MTPH affecting the mind of the main protagonist. A bleak and paranoid near future is the setting, in which an MTPH user finds herself deep in trouble, involved in forces far beyond her own experience, and that of her drug-induced sibling.

Interzone regular Williams returns to the setting of her issue 154 Adventures in the Ghost Trade, and returns quite successfully. The oriental setting, with a ghostly dimension not far away, sees an up and coming rock band dabbling in the occult. And you can guess that this leads them into doo-doo of a interdimensional spooky nature. Only slightly marred by me by and ending not quite up to the rest of the story.

Rare as a rocket. Nigel Brown.

The elderly neighbour is a strange gentleman, evidently without the normally compulsory bio-link to the network. And he claims to be a spaceman, and further still…

Transatlantic readers will possibly know Green through his Hartwell-collected ‘That Thing Over There’. More recently ‘Something Chronic’ and ‘Rude Elves and Dread Norse Reindeer’ showed a rare ability to do humour well in SF/fantasy.

This story is somewhat different. Difficult to categorise or describe, which is generally a good sign, Green takes current concerns with genetically modified food and puts them far back/far forward in time. He creates a quite believable human-yet-alien culture, and produces a very good story.