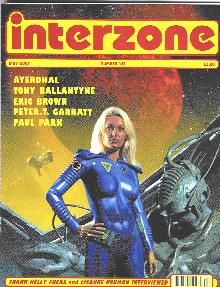 Credit to Interzone for including yet more non-English SF, in this case a story from the French author who goes by the single name of Ayerdhal, and who evidently concentrates primarily on novels.

A far future, galaxy spanning war with the human side facing a seemingly intransigent race, the Batiques, virtually nothing of whom is known. An academic xenologist is brought in to help shed light on a most peculiar, and ghastly response to an ultimatum following a successful seige.

The brief Interzone bio suggests Ayerdhal’s work has been compared to Iain M. Banks, and this does feel like a boiled-down version of a Banks’ novel in many respects. Most enjoyable.

Hmmmm. Time travelling fare – long in the telling, short in the entertainment. Major point of interest – the illustration on page 21, which is quite possibly the worst illustration in a SF magazine I have *ever* seen – it looks like something out of a children’s story book. Eugh. And in an issue with an interview with legendary illustrator Frank Kelly Freas! For shame!

Gaia fights back. To say more would be to risk spoiling this excellent eco-thriller(?) which really could only be improved by being longer.

Another short but perfectly well-formed story – unlike the characters therein, post-humans who are most definitely not well-formed. Effectively written and packs a punch.

With the exception of the somewhat pedestrian Peter T. Garratt an excellent range of stories. If you aren’t familiar with Interzone, try getting a hold of a copy.

I’ve mentioned the naff illustration on p21, and perhaps a mention of the covers. The letters page includes one contribution from a reader objecting to the lightly-clad woman on the cover of Interzone 166. This issue has (see above) a blonde babe in a figure-hugging outfit (this has the advantage over the previous issue of being considerably better executed). However, the back cover contains a full page ad for David Garnett’s ‘Space Wasters’ which is taken from the front cover. Now this illustration is downright offensive both in terms of being sub-mediocre artwork and damaging to SF (the cover shot on the Amazon.co.uk website doesn’t quite show it in sufficiently high resolution to make out the offensive female stereotype). ‘Don’t Miss This Class Act’, Michael Moorcock is quoted with regard to the book. Evidently the content of the book is far, far, far better than the cover. Orbit Books who published the book really ought to be ashamed.