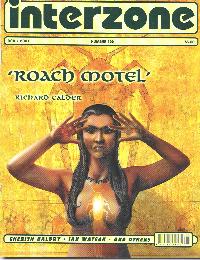 Another instalment in the far future Pike family saga, erstwhile claimants to the title Lord Soho of the Darkling Isles.

In this tale, rather than skipping a generation, we are re-united with the perverse, doll-hugging, young boy from the ‘The Nephilim’ (February 2001), grown to adulthood, a Captain of the Order of Black Knights. He is in the city of Cathay, a man with a mission.

Those dark forces, long-exiled underground, of which the Pike’s, being descendants of an octaroon (one-eighth orc blood), are examples, are holding greater sway. Many offspring of miscegenation are abroad (as in Calder’s novel Malignos, an extension of an Interzone novella), including the half-cockroach/half-human subrace of which the Princess of the fair city is a disturbing example.

Richard Pike has but one aim: marriage to the Princess, whatever the cost.

Rich, fecund prose. Some wonderfully poetic turns of phrase, including a lengthy paragraph describing kissing a maid, which is a treat to read and helps build a highly eroticized atmosphere.

The story builds up to a shattering climax. (!)

Not to everyone’s taste, (witness the letters page), but certainly to mine – the quality of writing getting over my general aversion to series/serials/novelisations.

A short tale of millionaires seeking that extra thrill which only money can buy. A planned hijacking of a holiday flight seems to offer a buzz, however expensive.

In the Shadow of Her Wings. Ashok Banker.

Mumbai-based author’s first SF sale to Britain/US. A professional assassin finds a target, a leader of an independence movement, too easy a target, and finds out, to his cost, that removing the figurehead of a movement does not cause a movement to falter.

Another short tale, with scientists playing with fire, and as we all know, when you play with fire you get your fingers burnt. Or in this case, when playing with wormholes of an onion-skin nature, peeling that onion is likely to make you cry. As with this kind of story, the calamitous ending is a) obvious, b) predicated on a team of scientists failing to spot what you would imagine to be a fairly obvious flaw.

Under the Saffron Tree. Cherith Baldry.

On the planet Xatra, a translator is struggling with his rapidly declining health whilst under pressure to obtain from the local population the secret of their good health. The situation is compounded by his feelings for the asexual Khallis.

As a Calder afficionado, another strong issue IMHO. The Banker and Baldry tales give good support, Watson and Gray are a little too obvious for my liking.