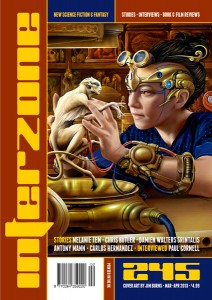 Buy a copy from amazon.com / amazon.co.uk

Autumn City is pretty similar to cities in Europe in Victorian times, with the exception of the fact that people emit ‘spores’ that give an indication of their emotions. And due to this, those in power seeking to limit groupings of people in public, the better to maintain authority. Young Powell, in love with the Duke of Autumn’s daughter, is a struggling apprentice clockmaker, who believes his invention can give him the status that he needs to win her hand. However, the moving lantern he invents is perilously akin to that of the theatre, a perversion long banned.

The story sets up quite nicely, but rather ends with a whimper, with the issuing of spores being a Chekhov’s Gun which you want to play a key role in the denouement, but which doesn’t happen.

Plus, two agents of the Duke follow Powell and his love ‘discretely’. Tsk, tsk, one of my least favourite typos…

I’ll own up straight away to struggling through this story! It feels more like a story from Interzone’s sister mag, Black Static, as it’s more horror than sf.

It’s dense, following the confused thought patterns of the protagonist who we are told has total recall, but for whom there are some dark shadows. She is confronting the father of the person to whom she relates what is happening (in as much as anything in the story is as clear as this). She clearly has had a terrible upbringing, as have her siblings/clones, and in facing up to the violent father, there is a climactic confrontation, but nothing is revealed, explained or resolved.

Carlos Hernandez. The International Studbook of the Giant Panda.

A young female journalist gets the opportunity to get a panda’s-eye view of the world. Or, rather, due to their supra-olfactory senses, a panda’s-nose view of the world. And indeed, the other end of the panda, as she is intimately connected to a robotic panda in the reservation of the American Panda Mission.

The APM are trying to use remote-controlled panda robots to demonstrate to the real ones they are attempting to breed just how to go about it properly, and the story gives you as much detail as you will ever need (perhaps more) on the breeding habits of pandas.

The work of the APM is challenged by protestors, who feel that what is happening is tantamount to bestiality (I’m sure some states and probably the NRA would fight the right to do this, and in Uta the right to do it severally) and this causes the journalist’s experience of taking a robotic panda out for a ride to be somewhat different to that planned, as she is the one taken for a ride….

Probably not, but is Hernandez trying to get a subtle message across : the USA using remote technology to fuck non-native species….?

Hernandes handles the taking on of a panda persona by the journalist well, and for my money I’d have rather seen this explored in a more sfnal way (and thus vastly improving on ‘Avatar’).

In occupied wartime Lithuania, Andrius, who has small magic at his fingertips, has much to regret – a wife who has disappeared, a daughter terminally ill, and a country suffering whilst the eyes of the world is elsewhere. We follow a couple of days in his life, holed up in his small house, risking the use of magic to create illusions for his daughter.

We follow the singularly unattractive protagonist through a subsequent slight uptake in his fortunes, but a case of coitus arborinterruptus leaves him on a dizzyingly downward spiral … and no prizes for guessing the ending!

A so-so issue, light on SF.