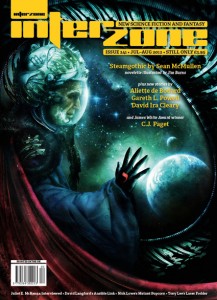 An entertaining novelette mashup of steampunk/Goth/Victoriana/aviation. An unfeasibly early steam-powered airplane is found, perfectly preserved, in a barn – if it had flown, the history of aviation, and the course of the last two centuries, would have been completely different.

The story is set with steampunk/Goth dressing-up being de rigeur rather than a minority hobby/fetish, and there’s enough detailing of the dressing up and the clothing/equipment to please the hardcore steampunk (beyond that in fact, I’m sure that there will be more than a few Gentlemen’s Trouser Moments from afficianados of the genre.

The challenge to get the craft ready for flight is taken on, and there is romantic rivalry, sabotage, and a quite splendid ending. Illustrated by Jim Burns, who concentrating on a illustrating (extremley well) the Aeronaute in flight, rather than the avatrice in a tight leather bustier with heaving bosoms on display which must surely have been his initial approach ;-)

Short, two-sider in which Neal, tired and under the influence of drugs, talks a way along a railway line in Mexico, and has a visitation, and is given a choice.

With Kerouac and Kesey mentioned, and it being 1968, Powell gives more than enough for many readers over 50 to be going on with, but others under 25 will probably only be vaguely aware of the background to the story. Wikipedia quite helpfully fills in the blanks, which, alongside the story, whets the appetite in terms of looking back half a century, to times when individuals horizons were being chemically expanded. Hit the cosmic road, Neal.

C.J. Paget. Invocation of the Lurker.

The James White Award is a short story competition for nonprofessional writers, and Interzone have been publishing each year’s winner for some time now.

Unlike many of the past winners, this story doesn’t show any signs at all of being by an (until now) unpublished author, and stands foursquare with the other stories in the volume. It’s a tight, claustrophobic piece, with a young woman forced to slum it, having been kicked out of her comfortable life and privilege. We find out what she has done, and who she has offended (quite neatly it’s a virtual AI taking the persona of Ada Lovelace). She is desperate to find a way back to her previous life, and a shamaness offers her the chance to do this, but is she willing to pay the high, very high, price for that chance?

So in addition to the award, a handsome trophy, and the cash prize, and publication in Interzone, C.J. Paget gets his name added as an author on Best SF. Just how long before clicking on the Filed Under link above will generate more than just the link to this story?

Excellent issue with each story hitting the spot nicely.