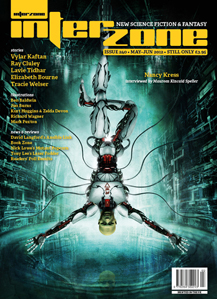 Lavie Tidhar. The Indignity of Rain.

Neat little story from Tidhar. Not much happens : a woman in what was once called Tel Aviv is surprised to see an old lover back on Earth, and they share a drink. That is handled well, with the emotions carefully and subtly attended to, but what gives the story that extra something, is the three-dimensional nature of the setting, as Tidhar provides a detailed future society based on what we have now.

No info-dumping, just carefully blended into the narrative, giving a sense of time and place, of characters living out lives, of the consequences of past actions, and the potential for the story to continue after it ends.

Nicely written contemporary story, with a well-drawn protagonist. It’s subtle and understated, not too heavy on the genre elements, with some neat touches (“All my paper-thin rationalizations collapse into ash, like a burning house of cards”), but the story perhaps missing just that extra something.

Disturbingly macabre horror set in a village in the mountains, in a society where a tithe is paid in blood to the Bloodcloth. Little is explained, as the story focusses on the impact of the Bloodcloth, curtains of which hang in homes and schools, and which have to be fed.

Tracie Welser. A Body Without Fur.

Multi-perspective story, two human, two indigenous race. There are differences, linguistic and cultural (as is ever the case in such stories), but there are some deeper, common instincts and emotions lying below the xeno-cultural subtleties.

Tidhar and Kaftan the pick for me, creating strong characters in realistic settings, the other three not achieving that.