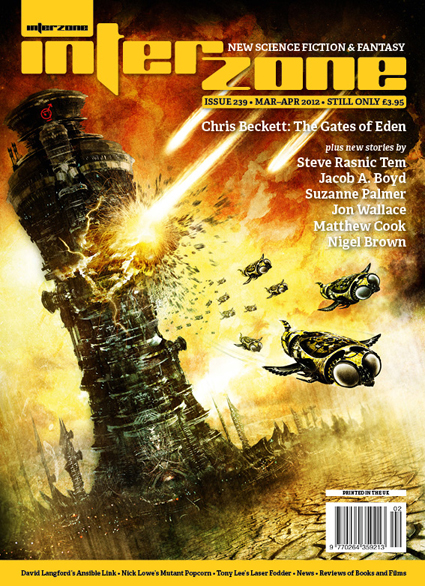 Dave Senecal’s illustration on p5 is an outstanding support to the story, capturing the isolation, lowering skies, and strangeness of the Colorado countryside which is being impacted, as are its residents, by strange visitations from somethings or other. The huge escarpment-like things which pass by can affect that which they pass by, as protagonist Will has found out to his cost. There’s no real story as such, simply an effective glimpse at the impacts, on a global and personal level, with a palpable sense of dislocation due to the passage of time.

A political prisoner is detained by an oppressive regime, with guards who wear ear-muffs…

.. on account of his ‘power’ to convince those to whom he speaks to carry out his instructions.

Excellent story from Palmer. A fruit-sharing stand on an deep space habitat called Utopia is the setting. The fruit-sharer has visions of what may come, and the young child apprenticed to the fruit-sharer has dreams of the bigger universe out there. All is not perfect on the habitat though, and the tension ramps up until the stakes get very high.

Jacob A. Boyd. Bound in Place.

A dark, and ultimately depressing tale of hobos in space. Actually the hobos is space bit is the first part of the story, and just how stowaways might live amongst the cargo holds of massive spaceships, and the risks therein, does drip, and my editorial steer would have been to concentrate further on that aspect.

The second half of the story sees the motley crew make landfall, and jump a ride onto a train heading into the city. There things get very dark, very dark, and whilst Cook provides a glimpse of a light at the end of the tunnel, we all know that tunnels and trains are not safe places to be!

Short, fairly limited story about a young woman with a terminal illness taking an off-world option to cheat death. It reads like a story from a magazine one or two levels below the standard of Interzone, with some slightly awkward writing and not quite enough depth in any area for the story to work well. The protagonist has a choice to make at the end, but the story is so short, and the character so roughly sketched out, which way the choice goes doesn’t feel important to the reader.

Tem’s ‘Twember’ provides some vivid mental imagery, giving a tantalising glimpse of something very unexplained. Palmer provides some more straightforward sfnal fayre, the other stories not quite having the same impact.