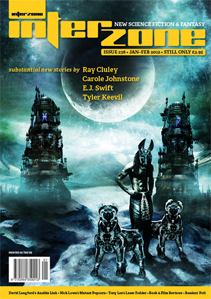 Excellent fantasy from Cluley, with a setting that convinces – a city rising from the sea on aged timbers, whose inhabitants live off the sea. Those closer to the sea are richer, whilst those further away have to eke out a living, and it is one of these ‘uppers’ who is the protagonist, a young man who dreams of life far away in the fabled city build on sand, Fata Morgana.

There’s more than a touch of Dickens in the setting and telling of the story, as he is orphaned, brought up by his unpleasant uncle, in a society where the rich and the poor live cheek by jowl, with little chance of improving oneself, a sort of mashup of Oliver Twist and Great Expectations. Cluley creates a vivid setting with some great imagery and detail, and provides a story that demands a sequel.

Science thriller set in a remote wilderness in eastern Europe, post-something. There’s climate change to contend with, and the story revolves around the exact nature of an animal in the forests which is killing the locals. Simply hunting it down isn’t an option, as the genetic mutations rife in animals (and humans) requires the authorities to identify exactly what the creature is, for should it be a genetically new animal, it must be preserved.

Keevil sets the scene well, as a female western scientist has to deal with reluctant support from the local scientists, and more openly hostile reaction from the local hunters. The tension builds as they trek through the forest and realise that the hunters have become the hunters. There’s a taut finish in a story that delivers what it sets out to.

Carol Johnstone. God of the Gaps.

A story that starts with xeno-monstrosities leaping out of every corridor, with every opening door leading to more horrors. Fortunately, it’s a theme park activity, and a young teacher escorting a pupil is grateful to see the sign to the shop at the end of the ‘ride’. However, they find their way to a museum dedicated to UFOs and alien abductions, and what seems like cheesy fun takes a darker turn. Johnstone’s protagonist provides a darkly comic Glaswegian take on things.

A first-published story by Swift, and it’s a good one, showing more assurance that you often get.

A spaceship is due to visit a penal colony planet, to return prisoners who have served their sentence back to Earth. Yun has served her long sentence, and is has a place on the spaceship for its return journey, but does not want to take that place. The story unfolds her backstory, the situation on Earth, and why she has no desire for that future.

A nicely balanced issue, with four authors new to me making the most of the space afforded to them.