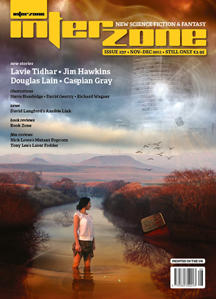 It’s a meta-fiction, tied in with his new novel ‘Osama’ from PS Publishing (link) – I’m not clear as to the relationship between the story and the novel – sidebar, or tangential – linking in to Tidhar’s own close run-in’s with ‘the war on turr’. Here he posits the killing/assassination of bin Laden as seeding further conflict, but sfnally through bin Laden sending out spores to infect those with revoluationary zeal (or at least the physical trappings of bin Laden). This happens as the world suddenly takes a very sudden turn for the worse/different, leaving the story a tale with American West settings, with tones of Apocaplypse Now, and an altogether multi-facted and clever piece of fiction(s).

Douglas Lain. Erasing the Concept of Sex from a Photobooth.

Gritty, sensual contemporary speculative fiction as a young couple have sex in a photobooth and are changed by the experience. There’s some strong visual imagery and it’s a rich story – the spirit of JG Ballard lives on…

A shorter story that feels like it would be more at home in a second-tier speculative fiction semipros rather than a top-level mag like Interzone.

A young woman who is more attuned to the emotions of insects and animals that her wheelchair bound ex-vet husband finds that the crickets from the pet supplies shop where she works have an impact on his condition. It’s okay as far as it goes, but ideally needed to go a bit further in one direction or another to be more satisfying.

Lengthy, staccato, fast-paced science thriller which starts with the simultaneous deaths of several actors, who are part of a very high-tech film industry. The filmic writing style didn’t really work for me – I’d much rather read a narrative than a form of screenplay.

Hawkins’ story takes up a lot of real estate in the issue in a story that didn’t engage, but the Tidhar/Lain stories very much did so.