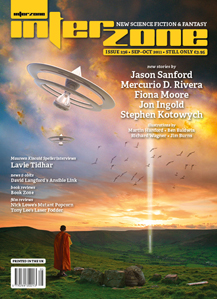 Stephen Kotowych. A Time for Raven.

Anthropological fiction, with the beliefs of the peoples of Haida Gwaii (formerly the Queen Charlotte Islands) forming the crux of the story, specifically Kiid K’iyaas, a mighty golden tree. And as a consequence, not really fantasy.

A sequel to ‘Plague Birds’ from Interzone last year, following Cristina de Ane and her blood-borne (and blood-let) AI, who travels the countryside dispensing justice.

At the moment of dispensing justice on a woman guilty of infanticide, a piece of knowledge comes to light that suggests that she, and, more worryingly, her AI, are making decisions based not on the true facts. It’s a worrying situation, and the story revolves around just what the local village AI is up to, and how it is attempting to persuade the village humans, genetically modified with animal DNA, to achieve its vision.

The unnamed protagonist exists in a strange world, the only human, who from time to time is suddenly required to set up a number of empty bars ready to entertain unseen guests. He has little left of his memories of a previous life, and we are left to guess what is happening, made easier by the insertion of references from scientific papers which make it perhaps a little too easy.

Jon Ingold. The Fall of the City of Silver.

Ingold takes us back to the ancient city of Tartassos, and explores what their fabled wealth in silver might have been built on, and led to. If you like your fantasy to be of the historical type (rather than creating entirely alternate histories, or indeed other planets and beings and cultures) then you’ll like this story.

Another in Rivera’s sequence of stories which explore the complex relationship between humans, and the Wergens, a race who find have an automatic loving response to humans, and for whom their own relationships are a tethering of two, the dominant of which survives.

Here we follow Cara, a young girl and the young Wergen who has that automatic loving response to her, a relationship threatened by Cara’s falling in love with a boy, and the Wergen entering into its own tethering relationship, which takes the story arc a small step forward.

An OK issue, but no standouts.