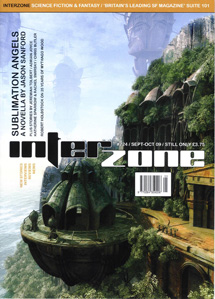 A lengthy novella from Sanford which had the slight misfortune to be read immediately after a string of stories from Dozois’ latest Years’ Best, and not quite living up to that very high standard.

The story reads more like a Young Adult story, as it whips through a story with a couple of young protagonists. A small group of humans is ekeing out an existence a long way from Earth, with a stratified society that sees those at the bottom of the pile living a dirty, stressful and potentially short life.

Katherine Sparrow and Rachel Swirsky. No Longer You.

A young man, recently out of a relationship, finds that there may be an answer to his solitute and his loss. But is he willing to pay the price, to accept a loss of individual self in favour of absorption into a collective being, in order to lose that solitude?

A blackly funny story perhaps more suited to Interzone’s sister publication Black Static (the sister that has gone slighlty off the rails).

In the middle of the night in an almost empty office block, a young worker finds that he has opened Pandora’s box, and the spam normally constrained within his inbox has taken on a life of its own. A life that is after his sorry ass.

As does the issue of Asimov’s to hand, a young writer has a go at writing a story with no human element, going for a totally alien protagonist and setting. There’s a dilemma for the runt of this aquatic litter, as coming across a source of feed gives it/her the opportunity to feed, when sharing the food is the societal norm.

Not so alien though to have recognisable genders, power imbalances, needs and drives. I’d rather a story sticking closer to a human norm, and exploring subtle changes in roles, norms and structures, at the expense of creating alienness.

Chris Butler. The Festival of Tethselem.

A far distant walled city is reputed to have a museum exhibit with passing strange powers. If it is ever stolen, it is believed that it will be as if it never existed.

Given the opportunity to get close to it, two ex-soldiers resolve to appropriate it. And, sure enough, they get what they want – or, in fact, one gets what he wanted (and damn the expense) in putting right recent military wrongs, leaving himself very much The Figure of Frozen Time, and leaving his colleague on sentry duty.

By my reckoning there must be well over 32 hours worth of watching and writing the film and DVD reviews – imagine just how much really good SF you could read in that time! Especially when the vast majority of reviews are pretty much saying that the films are varying shades of crap.

Nick Lowe and Tony Green aren’t teenage boys, the demographic the films and TV shows are mostly aimed at. (I know my 17 and 19 year old sons saw a lot of the films and enjoyed them, and are glued to Heroes). But are readers of Interzone in this demographic either? There is seven pages dedicated to film/DVD reviews – that’s space for another story!