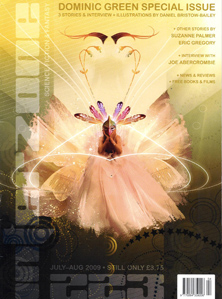 A special issue, with three Green stories, and an interview. The first was written to introduce the Proprietor’s Universe, which a further story in the issue is set in.

The good news is that if you like Alastair Reynolds’ its the kind of story you would expect to life – a big galaxy with ancient aliens with powers beyond our ken, lots of hi-tech and drama.

Unfortunately, Green isn’t quite in Reynolds’ league, and the story doesn’t really work.

There are a number of stylistic niggles, and inappropriate references, such as mentions of slide rules, and aerosol deodorants sitting awkwardly in a far future.

The premise is somewhat difficult to accept – why would the elderly human tasked by minding a very, very dangerous shapeshifting monster, build her a communication device that would enable her to get off the planet the pair of them inhabit?

There’s an offputting quick reference to female genital mutilation – not that I’m against addressing complex issues of cultural and societal differences, but if you’re going to do so, do it at greater length and with greater subtlety.

And having chased down and tracked the escapee, the minder ends up setting her up to travel away in a spaceship, to wreak further horrors. And why does the POV suddenly shift to the shapeshifter in the final paragraph?

Dominic Green. Coat of Many Colours.

Amazonian Brazil is the setting for genetic engineering experimentation to produce a hyperefficient food animal that can tolerate semi-desert conditions – using prehistoric DNA.

The experiment has resulted in a large number of creatures, and #2308 has produced an intriguing, unexpected benefit : a skin that can change colour – even when taken off the animal. The only problem is that #2308 may be showing sufficient signs of intelligence to prevent the use of the species for producing skin for leather.

Researcher Mullen is called in to prove that #2308 is not intelligence – and fortunately she has a talking parrot which is helpful as it can be used to illustrate the difficult ethical issues involved.

The story breezes along quickly, with the parrot having a major role, and it transpires that #2308 has also benefitted from some humane genome, but the conclusion, with the creature able to display in a very, very high resolution, and to display the results of some very complex maths and imagery. It all happens rather too quickly and easily.

Green creates an interesting planetary setting to start the story, then whizzes us off to another setting, where the local fauna are being hunted for gold. There are some unsympathetic human characters, and a dramatic ending in which a near-invisible, fast-moving predator wreaks havoc on the hunters. The lead protagonist is smart enough to best it.

After a first half that doesn’t bode well, involving academic manouverings between two human academics on an alien planet, Dr Desai finds that the connection she has made with the aliens is indeed a deep one.

Here, the central conceit relies on a suspension of disbelief : very advanced humanoid robots, caring for humans in a walled garden, would not realise that those they are caring for are dying – they do not look up their vast online libraries to ascertain what might be happening. Consequently, when a human from beyond the walls enters the garden and tells them exactly what is happening, it is too much for the robots to bear. Fortunately the protagonist robot is saved from a life of redundancy by the girl giving birth and leaving her baby with him.

Over the years Dominic Green has been a bit hit and miss for me, with some stories appealing, but some being a long way short of the mark. Unfortunately, none of the three in this issue took my fancy at all. In the interview with Green he gives a very unique description of the writing process, which rather tempts fate! The other stories are okay, but no more.