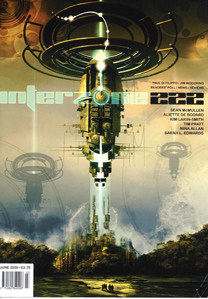 Steam-driven 1950s Rebel Without a Cause type-punks. After cyberpunk, and steampunk, presumably punkpunk.

With a Romeo and Juliet cross-gang love affair, the titular couple are in a race to get to the church in time – before they get wasted by her ex.

Short and entertaining while it lasts.

It’s the end of the world as we know it, and the protagonist is far from fine. Part of a computer simulation which has come to an end, those on Earth are told that they are in effect moth-balled, and are free to carry on, although with much reduced processor time, it is in very reduced circumstances – no need to eat, and no procreation of the speciies. With his girlfriend gone, and pretty much any kind of raison-d’etre gone, he has several options ahead of him. Finding an old friend, the couple start poking into dark places, suggesting that perhaps all isn’t as it seems.

Good, although I’d have liked to have seen more.

An elderly, high-status emissary from afar visits a small village on an out of the way planet. She is in fact visiting her homeworld, and is eager to trace what has happened to those she left behind many, many years ago in her timeline, and centuries of planetary time.

Whilst not finding out everything that she wants to, she is able to come to an accommodation with what she left behind, and to begin this final phase of her life once more in the village.

A young girl visits her uncle with her parents, in a near-future, water-scarce world. There’s some family history behind the separation of the uncle, who was married to her mother’s sister. We don’t find out, and are left with a short piece that shines a light into one small vignette, leaving the reader to work out what is in the dark shadows outside of the that beam of light.

The Breton coast is the atmospheric setting for a story that doesn’t quite live up to its promise. Francoise is drawn back to Quimper, pregnant. There are dark, powerful forces at work, and that which is within her belongs to a goddess of the sea.

The lead-in and setup are handled well, with characterisation, dialogue and setting all up to scratch. For me the denouement was disappointing, with the godess who is able to raise a city from the sea, and impregnate a woman from afar, comes across as a fairly average Evil Fantasy Queen, who is despatched in a very mundane fight, described in the kind of detail that reads like a TV transcript.

A scientist who is meddling with the dna of cheetahs finds he is in much, much deeper than he is aware, as the cheetahs have are far more than they appear.

The central conceit of cheetahs as having a world-spanning hive-mind, and are in effect planetary gods dating back from the beginning of time, was a difficult one to engage with.

Not the strongest issue of late, with Pratt the best of the bunch.