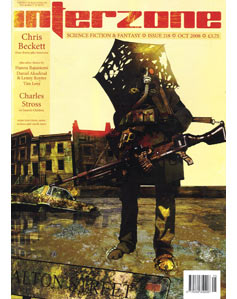 British author Chris Beckett gets an issue dedicated to him – well, the first half of the issue, in that there are three stories and an interview with this full-time social work academic and part-time writer. A nod of appreciation to the top quality cover illustration by Warwick Fraser-Coombe. So what of this issue?

Tammy Pendant, a ‘shifter’ who migrates between alternate Earths (and who has appeared previously in both Interzone and Asimovs) turns up in a field that has reverted to nature, and makes a big impact in the single night she spends with generally good-guy but downtrodden Angus. The field is a place of respite for Angus, from his domineering wife, and dead-end job, and he gets more from it than he had hopes when the tablet-popping girl who is on the margins of whatever society she visits, stays overnight and turns his world upside down. There’s not a whole lot to the story, but the setting is vividly described, and the time spent in the mind of Angus is time well spent.

A near future England, with global warming leading to global chaos, and the now virtually uninhabitable central climes seeing their inhabitants heading further north to cooler weather. England is on the retreat, with many trying to head further north still, and aggressively rebuffing those trying to enter our shores from the south.

It’s an interesting setting, and a setup which sees the struggles of a long-established immigrant couple facing the challenges of newer immigrants willing to work for less, in a society where the original English hold sway.

There’s a chance offered to the immigrant, and for me this is where the story slighty loses impact in its coverage of themes covered before (‘Think Like a Dinosaur’ most notably) in an experiment that creates a duplicate of the immigrant, with whom the story closes in a melancholy fashion, as he ponders, in his dying hours, whether this ‘real’ self has indeed been able to take the payment for the experiment to flee further north.

A prequel to the ‘Piccadilly Circus’ story in Interzone, which saw an elderly woman revisiting the city of her youth. Here, in a rare day of contact with their father, the two siblings visit the city, which is in the process of becoming something else, as increasingly those who inhabit it are using the technology to immerse themselves in another place, and to have contact with those not physically present. It’s the most effective of the stories by Beckett in the issue, stylistically trying something a bit different.

A story at the centre of the magazine, necessitating dodging between half page ads and pullout renewal forms. It’s a neat little story, exploring the dangers of making those invisible little friends that children have a (virtual) reality. Mr Fuzzy the camel is the constant companion of a young man who, like many in his generation, has found that the embedded friend has outlasted his stay and just will not be removed. He is struggling to find a cure for this mental infestation, as the wise-cracking camel is a serious barrier to this social and love life. So when the technical breakthrough is made, he has a choice to make : will Mr Fuzzy get the hump, or will Dicky?

Rajaniemi impressed with the only other story of his I read – Deus ex Homine in the excellent collection ‘Nova Scotia’. Here he is similarly hi-tech, with a POV character of an enhanced dog which, along with feline support, makes a daring raid to rescue their creator from the lengthy incarceration imposed as a result for his transgressive cloning experiments.

Tim Lees. The Corner of the Circle.

A strong finish to a strong issue. A teenage boy visits New York to stay with his Aunt Imogen, his own family life not going at all well.

Imogen is a strange, intense woman, in a city notably affected by alien contact, not least in the minutes after alien ships arrive, when the city become ice-coated. Imogen has a smart apartment overlooking Central Park, and, unseen, an alien partner, and her relationship with the alien is having a similarly transformational, if longer lasting, impact on her. It’s an effective story that gives a glimpse of a big city, of the grownup world, and of a world that is in the process of change.

An excellent issue, the only minor quibble being the back cover advert for a fantasy book which has a well fit fantasy babe wielding a sword. It eschews fantasy art tropes by not having her heaving bosom on display, but only by having her pert arse hanging out (she could only keep her cheeks so silky smooth and unblemished in such a rough and tumble world either through magicke, or some elven salve that is to Oil of Olay what lembas bread is to Hovis).