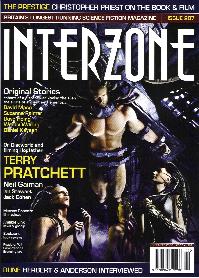 With a striking cover from Richard Marchand, issue #207 has reverted to a slightly smaller, stapled format having been perfect-bound for some months. I can see that this is doubtless economically sensible, but I did like having the thicker spine with the issue number and other details readable! The interior design is up to the usual high standard, with thin horizontal image crops on otherwise text-only pages particularly effective (if you can’t picture what I mean, buy the issue to find out!)

Dave Hoing. The Purring of Cats.

An impressive start to the issue, an upclose psychological analysis of the relationship between a counsellor and a woman charged with having carnal relations with an exobiological species. The backdrop is that Earth has been welcomed by one starfaring race to the small community of species who travel the stars. (Perhaps not unsurprisingly, the human race being what it is), humanity is at war with one species, and whilst the alien in question is not from that species, her crime is still a a major one.

More bizarre still, the alien she was spotted with is from a species with no genitalia. Nikki Teorson needed something from the alien, but it wasn’t carnality, it was something as simple as touch – making some kind of a connection. And when the lonely woman pleads ‘hold me’, Patrick’s world begins to slide from under him. We follow their ‘relationship’, finding out more about his distant relationship with his partner, and her relationship with hers, and about the society in which they live, in which a lot is forbidden. A pole-dancing bar provides a memorable scene when the total lack of connectivity between the ‘dancer’ and the audience is shown.

It’s a long, intense piece, that will stick in the mind.

Pity a new writer having to follow such a strong story! Fortunately, Suzanne Palmer continues the high standard set by Hoing.

What Palmer does, which is surprisingly rare in SF, is to have a go at making the narrative and dialogue just a bit different from today’s contemporary language. It’s a tricky balance, as if it goes too far it can take too much concentration at times (such as Iain M Banks’ ‘Feersum Endjinn’). But Palmer manages it, telling a story through the eyes of Irvil, an elderly space, whose habitat is a small living sphere, one of many in a community tethered together, in space.

When his neighbour and friend, Ginder, dies in a fireball on his sphere, and a newcomer immediately moves into the vacated space and starts asking about Ginder’s prime location, the oldster is immediately suspicious. The story quickly progresses, with Irvil avoiding a similar fate to Ginder, and swearing a vengeance on the murderers. It’s a sort of straightforward John Wayney kind of cowboy storyline, but the characterisation, language, and setting raise it above the run of the mill. An impressive early story from a new writer.

Made has had a couple of stories in Interzone recently, ‘Strings’ (#200) and ‘This Happens’ (#205). This is the best of the three for my money, and continues the standard set in the issue. It’s not by any means a new idea, but he handles it well : a young girl, genetically modified for improved intelligence and other tweaks, is being looked after by ‘foster parents’, who are jealously guarding her in a climate of growing world tension and antagonism to genmod experiments.

There’s a touch of pure Charles Stross in the way the background is provided through a news channel, “The Hertzel-Konzern and Coeur Engineering fusion takes another step towards becoming Kardia as both transnationals declare sovereignty andinwardly liberate shareholder equities. Rumours leaking out of the Superfile Corporation suggest that the company has been running a clandestine human gemod project and that at least one of their Frankensteins has escaped”.

Bright enough to identify what she is, the young Fransi uses her skills, far beyond what her foster parents are aware, to make her bid for freedom, playing off the adults and the politics to her advantage.

After three lengthy stories, the first of two short ones to complete the issue. A sort of multi-perspective story but from just one perspective, as part 1 has a young woman reviewing her Friday night vodka-fuelled one night stand shag, which tick tock repeats itself over the next few weeks. Or does it. And Part 2 has a slightly different view on events. Tick tock.

The issue closes with another short story, and just a bit too like the previous one for comfort – I’d have preferred to see the two shorts slotted in between the meater stories earlier in the issue for the perfect balance. In this internal monologue of a xeno-archaeologist who is trying to make sense of an anomalous alien cathedral-like structure, at the same time as making sense of personal issues. In succumbing to the lure of the stone ruin, he becomes as one with it, a mute testament to an unknown history.

Has there been a better issue of Interzone under TTA Press? Chock full of some excellent stories, with just the right amount of interview/reviews, and no column inches wasted on manga/computer game, there’s really only the Terry (yawn) Pratchett and Dune reviews that don’t do anything for me. But then again those were the two items my 17-year old son read with interest (before I got to read it, I might add!), so that makes for a generation-spanning range of content.