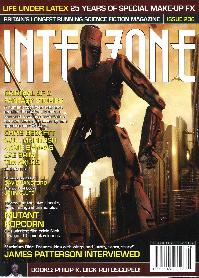 An excellent story, its impact all the greater for some atmospheric, appropriate to the story, top quality illustrations. Barras creates an intriguing setting, with interesting characters, and a plot that is far beyond a lot of routine SF.

In the far future, a small group of post-humans land on a planet, the rights to which humans have bought off another spacefaring race. It is a planet on which a previous terraforming has taken place, and they head into the bowl of the asteroid strike which was used to form a protected area which was seeded with flora and fauna. Some bipedal creatures, which came out of the hi-tech terraforming gloop as intended, greet them, and there is a palpable sense of alien about the setting and these creatures. This increases as the detail of the terraforming, and the means by which the creatures have developed, are slowly gleaned by the reader.

Barras appeared two issues ago, with ‘Summer’s End’ (#204), which I praised and felt could have been longer. This is a step up from that story, and augurs well.

There are a lot people missing sister-mag ‘The 3rd Alternative’, which is, we are promised, changing into ‘Black Static’. It’s taking a while, and ‘m worried it’s actually a Norman Bates situation, with frequent protestations of ‘Oh yes, she’s upstairs getting changed, she’s getting changed’ starting to wear a little thin. Just what is happening…..

I mention this as I’d characterise this little cracker as more of a ‘Black Static’ type of story, a noirish, nearfuture, violent thriller. The Distro refers to the distributed nature of the main protagonist(s) – who resides in several bodies, including a vat-grown slab of an enforcer. This intriguing situation is explored perhaps less than I would have liked, as one by one the bodies are taken down, leaving the POV character in reduced circumstances.

It transpires there are some seriously nasty guys out for revenge, and a bit of double-crossing, a stoolie in need of beating up (and how) to extract a confession, and a whole heap of icky gore.

Out on the boundaries of what I’d put in Interzone, and what I enjoy, but that’s what the editorial team are after, so that will be fine for those who aren’t wedded to the halcyon days of Pringle Interzone.

Will McIntosh. The New Chinese Wives.

Awkward timing for McIntosh, in that a couple of days ago I read Ian McDonald’s ‘The Djinn’s Wife’ (Asimovs July 2006), which is a very strong story of love between a male AI and a female dancer in his near future milieu. This is a story of a marriage between a female AI and a young man in a near future China (albeit a fairly Americanised China) and it doesn’t quite stack up to McDonald. Nothing wrong in that, of course. McIntosh’s take is, admittedly quite different in tone, and has its good points, but just doesn’t quite have the depth of McDonalds.

Beckett is one of only a couple of Pringle Interzone regulars featuring in the TTA Press Interzone, and he delivers in this story. At one point halfway through the story I did have my doubts, thinking that the whole setup was just too contrived, but the reason for the setup is explained, and Beckett provides a neat twist at the end – I didn’t spot it, but the clues were there and any regular crime reader would doubtless have spotted the twist.

Karel Slade wakes up in his hotel to find out that he is now in the clutch of two characters from some form of undercover agency – a Mr Thomas and a Mr Occam (who favours a razor – shame on you Mr Beckett for that pun!). They are willing to go to any lengths to get him to fess up to, and implicate colleagues in a secret Christian organisation who have been bombing scientists involved in work which they deem to be anti-Christian.

The initial twist is the psychological battering they give to him, by making it clear that he is in fact a vat-grown clone, created rapidly from a full body and brain mapping of the real Karel. So while the real Karel has left the hotel room and is with his family, the secret agents have all the time in the world to eke out a confession. The dilemma for the faux-Karel is whether he is loyal to the colleagues of the real Karel, and, more importantly, whether he feels he should be held responsible for the actions of the real Karel.

A two-pager, in which an alien spaceship stands mute observer above Earth, as humanity travels the galaxy and takes many shapes and forms, until, finally, the Last Man stands on top of it. If you can’t be arsed to read all of Stapledon’s ‘First and Last Men’ why not read this as a sort of Readers Digest version?

Jae Brim. The Nature of the Beast.

An intriguing shorter piece, which looks at the legacy of a wealthy businessman – that legacy being genetic cloning to ensure that he is able to carry on his work, in one shape or another – or, more specifically, one sex or another. He would have been proud to see just how the adage like-father-like-son translates to like-father-like-daughter.

An excellent issue, with Barras, Akers and Beckett being particularly praiseworthy.

The only problem I have with Interzone, which is a big one, is that it comes out only every other month, and I can read it in a couple of hours on a commute to/from work, which means that only one in about 60 days is an Interzone day. I’ve now got to grapple with the latest Analog double-issue of scientist fiction….

Actually, there is another problem with this issue – the whole page adverts on the back cover and inside back cover for books that wouldn’t get the time of day in the review section