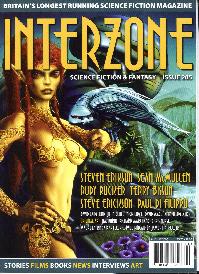 Cover art by Jim Burns, who last appeared on issue 199, and whilst these breasts are slightly less improbable, the outfit rather stretches the suspension of disbelief. It proved pretty difficult reading this on a plane whilst having to keep the front cover folded over and out of site.

For what it’s worth, I’d be putting Richard Marchand on the cover. He graced The 3rd Alternative #39, and his interior artwork with the Stanchfield story is, like his other work, much more 21st Century, whilst Burns’ mambo pictures are so 20th Century.

Short, effective piece of horror fiction in which the last moments of a family whose lives and home are cruelly devastated by a missile strike on the house next door are relived as those moments are rewound a few seconds, the damage being undone. However, this is for the benefit of the reader, not for them, as the flow of time returns to the original direction. The author hopes that this story may just change someone’s mind, although cynical old me feels that if you rearrange the letters of the first word of the story title you realise that isn’t likely.

Sean McMullen. The Measure of Eternity.

Fiori is a courtesan of a king in the fabled Arabian land of Ubar. She is high in his favour, but she is not in her first flush of youth, and fears that it won’t be long before she is discarded like many before her. Her fate is sealed, although a ragged beggar who it appears knows the value of nothing – quite literally in that he knows of mathematical zero, a hitherto unknown concept – enables her burial to be a noble one, and her handmaiden is given the opportunity to spread the knowledge which will transform the world, whilst the sands of the desert cover Ubar and consign it to history.

Justin Stanchfield. In the River.

Ah, some Science Fiction, and good take on First Contact, in which the crew of a spaceship are able to communicate with aliens which have appeared on the outskirts of our Solar System by submerging themselves into the aliens’ aquatic vessel. Jenna Ree is pulled back into the human spaceship, barely human, so far has she got to know and commune with the aliens. Her disorientation is compounded by the fact that her partner has been unfaithful whilst she has been studying and living with the very alien aliens, but in the end she chooses to remain with the humans rather than leaving with the aliens with whom she has so closely bonded.

Short tongue-in-cheek piece in which a computer-aided attempt to break a world record for counting, or rather thinking of numbers results in finding just a couple of gaps where numbers should be, and the first of those numbers is a much smaller one than you might imagine.

The longest and strongest story in the issue. It covers some big issues through the viewpoints of three flawed generations of a family. The big issues are Canada’s global position as a supplier of what in a near future in which global warming which was made water the new oil. That position is under military threat from those countries which don’t have water, and in the face of imminent military action, some drastic steps are taken to ensure that Mother Earth is treated with more respect in the future. The matriarch of the family is th elderly ex-PM of Canada, who has retired from her globe-trotting pressing-the-flesh role. Her somewhat dynamic son, and his daughter, are brought together at a remote hideaway when the full extent of her plan is finally revealed. She has in fact been passing on a nano-virus, with a view of infecting a significant proportion of the world’s population with a fatal virus which will be triggered when she decides the time is right.

For a newish writer the story bodes well for the future, with strong characterisation, and a no-easy-answers ending, compareed with, for example, the recent Analog story which also featured nano-viruses passed on by touch. Richard A Lovett’s ‘A Pound of Flesh’ (Analog Sept 2006) – features a (you guessed it) down-on-his luck PI, who gets a big commission from a (you guessed it) glamorous business woman/scientist, who uses a ‘truth nano’ to test his suitablity for the job.

The regular publication schedule and consistent high production quality and strong fiction continues to impress. New-to-me writers Stanchfield and Mills are the pick for me, with Mace I would suggest being better placed in the long-awaited Black Static, and McMullen’s story will appeal to those who like their fiction of less SFnal and more fantasy/historical nature.