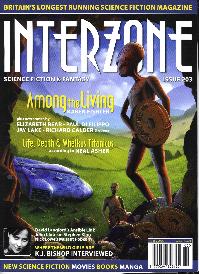 Paul di Filippo. The Furthest Schorr : 32 Fugues on the Paintings of Todd Schorr.

Clustered on pages throughout the issue are 32 mini-stories – longer than flash fiction, so probably nano-tales as they’re are generally about a half-dozen to a dozen paragraphs long. I’m not a big fan of ‘stories’ this short, especially by an author that I like, as I get frustrated that you just know that the author could have easily produced even more with each snippet.

Another problem for me is that the stories are based on, as you might guess, on the work of one Todd Schorr, whose name I wasn’t familiar with, other than (as a bit of research identified) his cover for PDF’s excellent chapbook ‘Fuzzy Dice’ (read but not reviewed).

Anyhoo, the vignettes are neat, as you would expect from di Filippo.

Karen D. Fishler. Among the Living.

Fishler’s first published story was the excellent ‘Miko’ in The 3rd Alternative’s #36, Interzone’s sister magazine. (It appears that this older sister has taken the hump, big-time, at the arrival of a young, attractive foster-sibling and is refusing to come out to play, hiding in a dark cupboard and threatening to eventually come out, but isn’t going to be nice…)

A further story from Fishler followed in T3A, and one in the first issue of the TTA Press Interzone, and ‘Among the Living’ continues a strong opening run of stories. Keeping in the military vein of her ‘Mission Memory (TTA #37), Fishler has a good go at covering ground previously trodden by many. Dake, an ex-serviceman, is approaching late middle age with his body failing to last the pace. He is offered the chance of returning to his youth, and the service of his country, by giving up his old body, and being given a new one. The main drawback – this will leave him a testosterone fuelled young man, and the wife, who he adores, some thirty or so years his senior.

The story follows him as he makes his choice, and his experiences back at a very nasty front-line. He has to finally face up to himself, or his older self, as it were, and (a slightly creaky aspect to the story for me) he finally faces up to his now very elderly wife, who has waited for many years to exact her revenge.

The climax of Calder’s troilistic entertainment, in which Cat finally struts her stuff in a quite enervating pole dancing scene, no less. However, her doomed relationship with her gentleman, Nicodemus, ends in an ill-fated rendezvous in a back alley, leaving her a cat who has got the cream, but remains unfulfilled.

A shorter piece, set in a near-future Orwellian state in which the all-seeing eye of the State controls much. A young couple, low on the very rigid social scale, are pleased to hear that their unborn child has been assessed as a 10 – the highest rating, and one which will improve their status. However, there is also a flag of concern with the child, and this is most unusual. The flag gives them an option to terminate, and it is their choice in this matter which has an enormous bearing on their future. A step up from the smaller presses for a writer, like Fishler, who is a Clarion West graduate, and who, from this story, shows some promise, although, as with many small press stories, it is a story which has an interesting idea which is handled ok, but misses out on that difficult to describe something that a more seasoned pro would bring to it.

An excellent story, one which a couple of years ago would doubtless have appeared in ‘The 3rd Alternative’

Issue #201 featured the complementary story, ‘Wax’, and I wasn’t overly taken, stating ‘I’m hoping that the pair of stories will be sufficiently linked to give that little bit extra to the story in hand’. I have to report that this wasn’t really the case, as ‘Wane’ provides another case for Detective Crown Investigator Abigail Irene Garrett to solve. It’s well written, and if you are after a blend of magic, vampires, and alternate history, then you’ll probably enjoy this much more than I.

Maintaining its very high standards, and it is to be hoped that the efforts being put into producing it and marketing it are rewarded in terms of sales and subs.