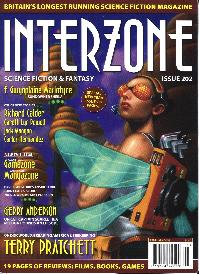 Now the longest-running British SF mag, Interzone continues in glorious full colour, and a hefty 60 pages. The covers continue to be eye catching and top quality (this issueDan Dos Santos http://www.dandossantos.com, and the interior illustrations ditto. With Interzone having a good distributor for evidently the first time in many, many years, this issue has hit the shelves considerably faster than usual.

When I first saw, a few months back, that IZ had bought a story from F. Gwynplain MacIntyre I was somewhat nonplussed. On the basis that there couldn’t be two authors with the same name, that meant that IZ had bought a story from an author whose recent work has gone beyond leaving me cold. Two of his recent ‘humorous’ stories were given very short shrift : “if your taste in humour is such that Benny Hill tickles your fancy, then this is a story for you. ” (Deadly Medley of Smedley , Analog April 2003), and “(B)anal ‘humor'” (Annual Annular Annals, Analog Jan/Feb 2004).

However, his ‘Martian Walkabout’ was in Terry Carr’s Best SF of the Year 10 back in 1981, and I didn’t make a note of it being particularly bad when I read it some time ago, and this story is similar to that in several respects.

The story is a long one, set on a planet circling the star Delta Pavonis in such an orbit as to mean that portions of the planet are permanently treated to it being mid-day. (This is clearly spelt out early on in the story. Very clearly.)

Bodger and Dicko are two ‘compozzies’, vat-grown creatures who have uploads of several dead humans in their brains, giving them composite memories. Bodger, the POV compozzie, has been designed to be considerably less bright than Dicko, who is definitely the brains of this two man crew. Their job is to work under the blazing sun to help terraform the planet.

MacIntyre gets into the head of Bodger very well, and the banter between the two works well (if a little too heavily handed for my liking). The action kicks off when they have a rare visitor, someone who, rarer still, is a female human.

‘Sundowner Sheila’ is carrying her own emotional baggage, memories of her childhood on Earth. She comforts herself with the brighter Dicko, and unbalances the relationship between the two labourers. There is a dramatic ending, and the exact nature of Sheila is revealed in a memorable sequence in which the future of those who will live on the hot planet is vividly shown.

Certainly the longest bit of reviewing I’ve done on one of F. Gwynplaine MacIntyre’s stories, and, with a few reservations about it being a bit too much of a caricature of Ozzie culture, the story works well. The opening page is somewhat difficult to read on its brown background, and the double column layout does occassionally cause problems when a page which is normally two long columns of text becomes in effect two separate pages of two columns. (Difficult to explain without the proper typesetting jargon!)

A shorter piece, set on a a scientific space station encircling a planet which is being terraformed. The initial colonists have made some mistakes, and the science team are hard at work trying to undo the problems created. This involves having indigenous macrobes living in human carcasses in a symbiotic relationship. A young boy on the station struggles with the robotic replacements for his brother and mother, who he believes are on Earth, and with his father, a scientist, not able to spend much time with him. However, his inquisitive nature leads him to find out more about the work with the carcasses, and…

A short and effective piece.

Another shorter piece, set in a near future NY, in which traffic is assisted across and about the city by circular multi-lane tunnels, with cars travelling in lanes at every angle on the interior of the tunnel (ie including upside down).

The tunnels are death traps (rather too many crashes per minute than really holds up!), and we follow a cabbie whose paranoia just might, for once, be a help rather than a hindrance, as he believes the dudes he picks up might just be up to no good. (Actually, speaking in a foreign language, toting guns, and holding scary vials with green liquid in them doesn’t take a Hercule Poirot to spot as being slightly suspicious!)

For me the setting is an interesting one, and the threat of dying with Billy Joel on the radio is indeed a quite horrendous one, but it isn’t quite a Dickian exploration of paranoia in an urban sf landscape.

An author new to me, Powell’s previous publications being primarily in online sources of which I haven’t availed myself.

Mars is the setting, with a young man heading into a domed town to extricate his ex-lover, who has been transmogrified by a nearby telecomms facilty whose runaway AI has, unlike other AIs who have achieved sentience, decided to stay in the real world as opposed to taking a virtual existence. Politics and big business are invovled, and he finds himself having to make a decision about his future. A very big decision.

If you’d rather not read all of Stross’ Accelerando, or an Alastair Reynolds’ novel, or Ian MacDonald’s ‘River of Gods’ then this would be a much shorter read and one which, for a relative new writer, satisfies.

My main moan is that the illustrations are fine, but don’t go far enough. I’ve upbraided editor Andy Cox in previous reviews for showing the female form in deshabille, but shying away from the male form. The illstrations provide a perfect opportunity to redress the balance, but the otherwise male nude has his modesty kept intact by one use of a hi-tech equivalent of the gossamer lacy bits that similarly protected the female bits in classic paintings, and in another a bit of judicial airbrushing of the meat and two vegs.