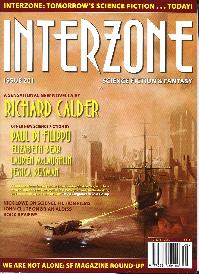 A full-colour, handsome issue #201 sees Interzone draw level with New Worlds as Britain’s longest running SF magazine, and re-invigorated by TTA Press with a much more ‘professional’ as opposed to ‘small press’ attitude to the magazine, ones hopes to see the magazine continuing for a long time to come.

Not only does Thomas Equinas has a horsey name, but he has a large proportion of horse genes, on account of his being a genetically spliced creation : 51% human 49% equine. Working as a labourer on a rural farm, a chance encounter with a female human (and if you know Di Filippo, you’ll know what kind of encounter) leads to her giving him the ability to read.

Thus enfranchised, he is able to rise to a more prominent position in the near future Earth in which the story is set, a fascinating future in which genetic modification has been taken to some strange conclusions. But there is a threat to the spliced creations, and Thomas has to flee with an egg holding the future of that race, a veritable Teleological Ark. The story follows the trials and tribulations of said Ark, aka Swee’pea, as an evil representative of humanity, in the shape of a Manticore, is set on their trail. However, Swee’Pea has the quite handy knack of being able to morph into any of the Splice creations, which stands him in good stead for fighting off the Manticore (and for a lot of rampant rogering, as is Di Filippo’s wont).

Returning to his Ribofunk setting after somewhat of an absence, which will doubtless please those that enjoyed his riff on biological cyberpunk, and intrigue those, like me, who missed out on it first time round. And he finishes with a single sex act that is at once incestuous, homosexual, bestial and necrophiliac, and which only features two partners, is quite an achievement! Up to his usual standard, a story which read with the full whiff of the print virtually flying off the pages of a the freshly minted mag will have you boggling.

A shorter piece from a new writer which takes an up close view of emergent AIs through a concierge AI and a translator AI who are chewing the fat, musing that not only are humans meat, but they can travel in boxes. The bigger picture is that a lot of humans are now worshipping Sheila, an AI who it appears wishes to deal with humanity on a baseline DNA level rather than as a species, through an extract from a SHEILA-L forum, and from the AI herself.

You can go to Lauren McLaughlin’s website to hear the song which complements the story. Although please note that I am pointing out for informational purposes that you can so do, and that this does not constitute an endorsement thereof.

Richard Calder. After the Party (Part 1).

Calder had a series of lengthy interlinked stories in the early part of this decade in Interzone (the editor admitted that they were rather lengthier than they had been expecting!). Following up his interview in the previous issue, Calder provides the first installment of a story which features buxom vampiric tarts, lovingly described using a vein of purple prose throughout – I for one can imagine Calder hard at work squeezing that purple vein.

Clearly the work of a master, bated breath have I for the next installment.

A newish writer, and a new writer to me. The story is set up well in the first sentence “The twelfth clone of Virtue Kana’s dead lover came to call one day..” and we follow Virtue and her crew member as they embark on a tricky offworld aquatic prospecting trip. Said clone duly arrives, and after some dramatic action we find out at the end exactly what has been happening and why.

There are a couple of clumsy bits of writing which grated for me (i – if a sentence finishes with reference to ‘a perfect, tiny miniature’ then the next sentence shouldn’t really use ‘tiny, perfect’ straight away; ii – why refer to a harpoon as a ‘poon several times in a couple of paragraphs? as it jars unnecessarily; iii – the main character remembers ie repeats something she said a column or two previously, as if the reader may have forgotten), and the story didn’t quite flow as well as it could have, finishing somewhat arbitrarily and low-key. The reveal at the end sets out an interesting background and motivation for the main character, although for my money I’d have preferred to see that at the beginning so that we could see what she was up against during the action rather than having a ta-ra reveal at the end.

I wonder the extent to which there is editorial attention to such matters? If you know your SF history you’ll know that John W Campbell gave a lot of advice to his writers, to the extent of almost co-authoring some rewrites from the sound of it.

There’s a complementary story to Wax (‘Wane’) due in Interzone shortly, and I’m hoping that the pair of stories will be sufficiently linked to give that little bit extra to the story in hand.

The setting is a potentially rich one, although not exploited to the full. New Amsterdam was the settlement that eventually grew into New York City, and in it we follow Detective Crown Investigator Abigail Irene Garrett as she investigates some nocturnal murders which have a whiff of necromancy about them. She is herself a witch (she has a wand), and has two suitors who are after her hand – actually they are after all of her bits, and one is succesful to the extent of sinking his teeth into her thighs (being of a vampiric persuasion).

The mystery is solved (I’m so out of touch reading mystery stories I have to apologise if I missed the fact that the story was pushing the solve the mystery element). I’m in a bit of a quibbly mood, so I’ll quibble over the fact that the setting felt somewhat of a generic Hammer Horror misty vaguely 19thC Victoriana, rather than a Dutch settlement of an earlier vintage, and the fact that the main character was called ‘DCI’ by fellow law enforcement officers, which felt rather 20th Century.

The Di Filippo story is the pick of the bunch for me, with Calder/Bear both offering olde worlde vampiric offerings with more yet to come. For me, one olde worlde vampiric offering with more yet to come is fine, but two in one issue? ;-) The richer prose of the Calder half-story was more to my taste than Bear’s, which didn’t quite ring true. Mind you, I’ve only just finished reading two linked Suzy McKee Charnas’ vampire stories from 1979/1980 so maybe I’m vampired out at the moment.

Good to see newer talent like McLaughlin and Reisman getting a chance alongside more established names. The only fly in the ointment for me is the fact that Interzone is bi-monthly, so I’ve got several weeks to wait for the next one….