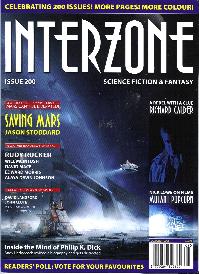 A milestone issue for Interzone, and it has reached #200 re-invigorated to an extent that the phrase ‘venerable Interzone’, with which the issue would have been greeted had the magazine made it to this point under its previous ownership, is entirely inappropriate for this full-colour, eye-watering issue. Eye-watering? Well, the smell of freshly printed ink was particularly pungent on my issue. Perhaps this is a ploy? – get readers high on the fumes from the magazine, the better to enjoy the content.

The issue opens with an interview with Richard Calder, whose purple prose appeared in a number of the later issues in the David Pringle-era Interzone, and which evidently divided the readers (I was in the camp which enjoyed the stories). The main problem for me with the interview is that the photo and the the content are perilously close to that of the scathingly satirical spoof horrror writer Garth Marenghi, particularly when Calder ponders the nature of his muse. Anyhow, Calder has evidently worked his magic on the new editorial team, as he has a monster (28,000 word) contribution shortly to appear in Interzone, and I’m looking forward to that.

For me the issue’s fiction content starts with a bit of a disappointment. A patrol of near-future but very hi-tech troopers are behind enemy lines and find themselves at risk of being spotted by enemy troops. To make matters worse, they are near an encampment of civilians, and the dramatic conclusion comes when a boy herding goats wanders with his charges towards the concealed troops, leaving them with a moral dilemma – silently despatch him, to stay safe, or run the risk of being rumbled.

Not a hugely original plotline, and for me there is far too much detail seen through the eyes of the patrol leader, as he checks his watch, reviews his maps, deploys his squad, checks his watch etc etc. which gets in the way of the moral issues of decisions which are made by individuals and by governments in times of war, and the anonynimity of the soldiers creates little concern for them.

Illustrations by Jesse Speak work well with the story.

The second story is a big improvement. It is the kind of story which sister-publication The Third Alternative did well, and is presumably now more likely to appear in Interzone now as that magazine takes on a darker due and becomes ‘Black Static’.

As such it has a near-future, urban setting, in which a young man is struggling to resolve personal and relationship issues in a city in which the population has been badly affected by viral attacks and the like from terrorists. He is struggling to get over his ex-, and tries to find another partner through VR speed-dating, and we see more of him revealed as he engages briefly with potential dates.

McIntosh’s ‘Totems’ in issue #196 (Jan/Feb 2005) was similarly strong, and was his first professional sale, so an impressive start by this new writer.

A classy, off-the-wall story in which the eponymous Hieronymous is brought from his own time, before his career has taken off, into the arms (the welcoming arms) of Glenda Gomez, thanks to the good services of Harna from Hilbert Space.

A sequel to Stoddard’s ‘Winning Mars’ which appeared in #196 (Jan/Feb 2005), and which uses the same narrative technique of several story strands told in very short segments, and illustrated in the same vein by ‘Glitchwerk’ through TV screen images. Stoddard draws heavily again on his advertising background, and overall the story does suffer for me in terms of sequel-itis : what worked well once loses its impact second time around.

The story follows a couple of characters from the first story, which was a reality TV show based on a race on Mars. The winner of the race appears again, as does one of the game show originators, and a corporate guy. The story moves towards a climax on Mars, by way of corporate scheming, potential attack on those colonising Mars, and a scientist who has successfully rolled back his DNA to be fifty years younger, but the ending is rather anti-climactic. Heavy on the dialogue, for me the story doesn’t quite have the impact of the first one through trying to cover too much and inevitably not covering anything in enough detail.

A very strange story, a literary equivalent of a Salvador Dali painting, in which a strange creature living within a bizarre ‘body’ with a two-dimensional friend, is visited by a human. He is able to respond to the challenges which she sets him, and reveals that humanity is in the process of retrieving all humans who may or may not have ever lived, before using the energy from all universes, no matter how strange.

Alternate History (something which does not tickle my fancy) in the guise of a Lester Bangs article ‘Thinking the Unthinkable About Ronald Reagan’ which purportedly appeared in ‘Creem Magazine, December 11, 2000’, in which the Beatles career takes a few different turns, John Lennon becomes an assassin as opposed to a victim, and Ronald Reagan does not survive. Meh.

IMHO, if you have to do a google search to find out just who exactly the character in the final paragraph is, then either you’re reading the wrong mag, or the story is in the wrong mag. (And is Barrack as opposed to Barack intentional, or a typo?)

The full-colour works well, giving the magazine much more visual impact and shelf-appeal than the last issue, with strong ‘mainstream’ layout which will doubtless appeal to Joe Public, making it a very handsome #200. Hopefully, with a new distributor on the case, the magazine will be flying of High Street shelves at a rate of knots.

Fiction-wise, for me McIntosh and Rucker are the picks, and Johnson provides some boggling imagery.