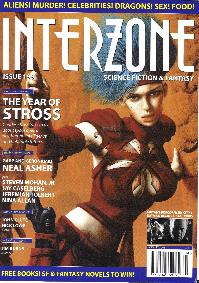 TTA Press took over Interzone last year, and it has made a refreshing change to be party to the thoughts behind what publisher/editor Andy Cox and his team have in mind with regard to the direction of the venerable title, through the TTA Press Discussion Boards. With the previous regime a smoky bar in Brighton seemed to be the only way of keeping abreast of plans (although the plans were evidently to keep on doing what had been done for the last 180 issues).

Cosmetically, this issue is as big a step forward as there has been in the magazine’s near 20 years. The masthead and cover layout have been changed following professional advice, with a view to Interzone sitting more comfortably on the bookshelves. The layout certainly looks similar to the likes of other sfnal mags like Starlog/SFX, although I’m not sure how many people browsing the shelves will spot that the top strapline ‘Aliens! Murder! Celebrities! Dragons! Sex! Food!’ is tongue in cheek. (Personally, I’d much rather do without ‘Dragons!’)

The cover evidently ‘showcases the sensual explorations of women trapped in their alien environments’. Hmmm. I have mentioned this recently, and personally feel that the illustration didn’t need to feature the squished-together cleaveage. There are plenty of other titles on the bookstand doing that kind of thing already, thank you. I read part of this issue in public, and had to go through complex machinations to keep the cover covered up. For me, a disappointment after several excellent covers.

Also noteworthy is the fact that the issues is ‘perfect bound’ ie no staples, which has the big benefit of enabling the issue and content details to be printed on the spine, enabling easy identification of each issue

So, still perhaps an evolutionary rather than revolutionary redesign, and hopefully tied in with a decent link with a distributor, we’ll see Interzone on the High Street soon.

What of the interior?

The contents listing is spread over two pages, nicely illustrated, with the content listed in chunks, cleverly identified ‘intermission‘ for the fiction, ‘interview‘, ‘interface‘ (editorial), ‘interlocutions‘ (reviews). The next two pages feature the editorial, next month (full colour throughout the #200 issue!), and competitions. David Langford’s ‘Ansible Link’ is spread over the next two pages, and ‘chunked’ into sections, which works well (although the mono image of Mr L isn’t the most flattering!). The fiction then starts, continues, and concludes, uninterrupted, which is a break from tradition. It certainly helps keeping the content easily identifiable, particularly for the new reader.

And what of the fiction?

Steve Mohan Jr. The House of the Beata Virgo.

Mohan has primarily appeared in the smaller presses to date (Challenging Destiny / Talebones etc), and its always pleasing to see the newer names working their way up through the magazines. This shorter piece is an effective one which looks at celebrity and identity. The protagonist has had her DNA tweaked to be a true replica of Madonna, or, to be more specific, the ‘Papa Don’t Preach’ Madonna. She is starting work in a brothel, one staffed entirely by similarly DNA-modded Madonnas of various persuasions. The background to her finding her (ahem) feet in her hostess role is that society is having to address the legal aspects of identity when DNA duplicates have been made possible through technology.

In an ideal world I’d have to read Asher’s many books, but it looks like I’ll be following in my late father’s footsteps and having to wait for retirement to catch up on a lot of reading. In the meantime I’m going to have to make do with reading his short SF, which is almost invariably to my taste.

Set in his ‘Polity’ milieu, this longer story gets off to a good start with the introduction of a ‘reified’ character – someone brought back from the dead. Garp in an ex-policeman, as well as an ex-human, on the planet Banjer. Visiting Banjer is journalist Salind, and he is intrigued by Garp’s attempt to hunt down his murderer. Salind finds his AI link and instand recording of events isn’t enough to get him into very deep water with the local, corrupt police, but pushes on with his investigative reporting, in spite of another journo coming to a particularly icky end.

The Polity are due to offer entry to their family to Banjer, but the criminal underworld and their drug trafficking activities would appear to preclude this happening. However, Salind and Garp (uploaded memorably to a huge Golem) expose the criminals, and obtain revenge (through the AI geronamid who has taken on the form of an allosaur for his investigation).

An enjoyable romp, only spoilt IMHO by the appalling illustration. The story gives endless opportunity for illustration, but that bit of the story which was chosen was the bit which referred to ‘two voluptuous women clad as fantasy barbarians’. So what we get is an illustration that is not only sexist, but quite poor, as the artist hasn’t quite got the nack of doing faces yet (unless I failed to sport a mention in the story that these women has faces like a dog’s bum with a hat on).

A three-pager in which human colonists on another planet struggle to make sense of their future, when that future is to have children which, for an as yet unknown reason, are arguably less than/more than human. Probably could have done with a little more length. The story features one couple struggling with coming to terms with their child, and another who take more direct action and have to face the consequences, which in such a short space isn’t easy – perhaps a tighter approach featuring just one couple who faced the dilemma might have been better?

A short sensitive piece in which a human colonists reflects on what she has left behind in making the long trip to Menhir Magna, against a backdrop of her study of the dragon-like indigineous species.

Mind you, those attracted by ‘Dragons!’ and ‘& Fantasy’ on the cover might be disappointed at these dragons (and doubtless slapping their mighty thews in anger).

Jeremiah Tolbert. This, My Body.

As a boy Antonio was taken into Holy Orders, and underwent genmod so that he could give very much of his essence to the food which he prepares, and serves on his very body, to enable supplicants to commune with God.

Now, as a young man, he is working in a brothel-cum-monastery, hired out by the night to (mostly) females, whom he serves with food and then services. His dream is to be taken into private service, to earn enough money to buy his way out of his Holy Orders and to re-engineer back to be truly human. This opportunity does arise, although it challenges him to come to terms with what he is, and the rich merchant who buys him for his wife, and their daughter, all have various needs which he must fulfil.

An interesting and satisfying story, although in a story about food, you should really be spelling dessert correctly.

Mind you, considering the story featured a bloke serving food up on his naked body, you would have thought there would be an opportunity to slip in an illustration with a bit of male anatomy on display, for the female readership (and those males with a penchant for that sort of thing), but no, the illustrations feature a silhouette of a naked female.

The fiction concluding, the remaining content is made up of

An excellent issue, full of high quality SF fiction (nothing for the fantasy fans though, which is fine by me) and non-fiction. Roll on the full-colour #200.