Nov 10, 2005Leave a Comment on Imago – The Fantasy Art of Jim BurnsAnthologies

“They’re Breasts Jim, But Not As We Know Them” being a review of ‘Imago – The Fantasy Art of Jim Burns’, published by Titan Books, 2005.

If you read my review of Interzone #199, you will have noted that I gently upbraided the use of a cover illustration of a splendidly buxom young woman (and I wasn’t the only one so to do). So that perhaps makes my reviewing a collection of similar pictures by the same artist, Jim Burns, with the same cover illustration, somewhat perverse. But it struck me that in the early days of my SF reading, as a teenage boy in the 1970s, the visual attraction of SF magazines and books certainly played a role in my burgeoning interest in SF, so I thought I’d have a retro-review of some SF imagery as part of looking at the book in hand, despite my wife gently upbraiding me for looking at a book of drawings of scantily clad women young enough to be my daughter (doh!) and my 15-year old son opining (and he is the type to opine) that the book was ‘pervy’. 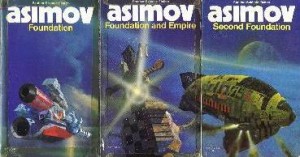 I have to own up straight away by stating that IMHO there is but one SF Artist and He is Chris Foss. My early SF reading was initially about 25% Isaac Asimov. One reason for this was that there was only one bookshop in the outpost that was British West Hartlepool in the early 1970s, (pop : 100,000 bookshops : 1), and so there was a limited choice available. They had a couple of shelves of SF and most of it was Panther editions of Asimov’s copious output, and as my pocket money wasn’t that generous, I would buy a new book of his about once a month. The Foss illustrations were mind-boggling. He did spaceships and he did monstrous vehicles, against planetary and deep space backdrops, and they were unlike anything else I had seen. Bear in mind that in the mid 1970s there was very little film and TV SF, so that the creaky Star Trek (The Original Series) opening -swoosh- of the Enterprise in orbit was quite impressive. I was particularly taken by the way the three of Asimov’s Foundation trilogy fitted together to make a much bigger picture. That was a neat trick which I can’t say I’ve seen since.

Another 25% of my SF reading was Edgar Rice Burroughs’ Mars and Venus books. This had been sparked off by reading a version of ‘A Princess of Mars’ which was “Specially Adapted for Boys and Girls”.

I don’t know who the artist was, but the cover image (the book itself has long gone) takes me back to c1971. As you may well be aware, there were the best part of 18 books to collect in all, and here it was the New English Library and various artists to thank for providing a collectable series (and yup, still got them).

As you can see from the covers, scantily clad women featured quite strongly, in poses to bring out the protective male genes in even a spotty 13year old.

The cover of ‘Warlord of Mars’ was somewhat sub-standard (not lets not mince words, it was crap). And that ugly old bloke on the cover of Llana of Gathol was enough to put you off your stroke.

In pulling off (no, don’t titter) the copies of these books from the shelves just now, I was surprised just how stilted the writing style was. That I made my way through all the books, was probably an indication of just what little fiction there was to hand, and explains why my aforementioned son turned his nose up at them when I suggested he read them.

Another 25% of my reading were the James Blish written stories taken from Star Trek episodes. I won’t put up covers of all 11 volumes as they are somewhat same-y!

Clearly the reading of series has passed down a generation as the eldest son also tends to tick to series : Harry Potter (doh!), Terry Pratchett, and a couple of other series by the likes of Philip Reeve, Ian Stewart & Chris Riddell, White Dwarf magazine, PC Gamer, and now (doh!!) Dan bloody Brown.

As far as magazines were concerned my local newsagent just had ‘Science Fiction Monthly’ a short-lived, large-format mag. I had thought the magazine only lasted 12 issues but carrying out a google search, I have just found out, after some 30 years, that it actually lasted 28 issues! My local newsagent had said that they had stopped publishing it! What a bastid! Visit Terry Gibbons’ excellent Visual Index of Science Fiction Cover Art for more details. (I can feel an eBay spree coming on…) Anyhow, for those issues I did get, it was very much the artwork (big A3 full colour) that attracted me. The fiction I found not quite as accessible.

I think I was getting into my SFnal ways then, as I followed the true and righteous path to SF as opposed to succumbing to the lures of fantasy. Had I been so inclined that way, I would imagine that Roger Dean would have replaced Chris Foss as my primary visionary. I also wasn’t into prog rock/heavy metal at the time as were a number of schoolmates with more developed musical tastes, who bought LPs frequently adorned with his paintings. Fortunately, the musical muse didn’t strike me for a couple of years and it Punk Rock which embraced me as my first musical love (a love which abides to this day).

When I see Roger Dean artwork I can’t help but having flashbacks to spotty adolescents in tight jeans with perms holding Yes albums!

The undisputed maestro of the hard rock school of fantasy art was of course Frank Frazetta, and I have to admit some of his artwork did its best to lead me astray, and there were a number of his paintings which I copied for both pleasure and to complete school art assignments. As with the ERB covers the women were in a state of undress and often in danger.

At least Frazetta had the decency to populate his paintings with similarly ridiculous stereotypes of men – huge, muscled men with mighty swords and axes.

One excellent book which I bought around this time was Franz Rottensteiner’s ‘The Science Fiction Book : an Illustrated History’, which, whilst mostly if not all B&W, covered the history of SF illustration extremely well, However, Rottensteiner’s short chapter explaining ‘Why There is No Sex in Science Fiction’, was contradicted by another purchase of mine at that time – Harry Harrison’s ‘Great Balls of Fire : A History of Sex in Science Fiction Illustration’. And the cover of that book was by one …. Jim Burns.

At that point though, for me, the visual side of SF was primarily served through the cinema. Star Wars, Alien, Blade Runner etc came close on each other’s heels – certainly considering that prior to this a truly excellent SF film was as rare as a hen’s tooth. I suppose I could have got in the comic (whoops, graphic novel) side of things. My brother got into Heavy Metal/Metal Hurlant in a big way, but my preference remained for the printed word. I read the odd SF novel during the 80s, and then began reading the short form of SF through Dozois’ annual anthologies, and in the 2000s began reading magazines.

However, starting to read the monthly magazines in 2000 started to re-attune me to SF as a visual form, especially as I was seeing the whole range of art – the good, the bad, and the downright ugly. The three main American SF mags are fairly conservative in their covers, with very few giving any inkling of a heaving bosom. Spaceships, planets, alien landscapes and so forth are their staple, which is fine by me. The only quibble I have is that occasionally one slips by which is just plain bad. F&SF covers feature people more regularly, and the quality of their artwork edges the other two for the most part.

And one of the artists regularly adorning those books is Jim Burns (all of the above, and more). The covers he has produced for these books are exquisite, and a couple of resources on the web, such as http://www.ofearna.us/art/burns.html and Artists UK and the Official Peter F Hamilton website give an indication of the broad range, and huge volume of high quality artwork Jim Burns has produced (albeit over 30 years).

Burns won the Hugo for Best Artwork in 1987 and 1995 and has had two previous collections of his artwork published – Lightship (1986) and Transluminal (1999), both of which evidently feature a range of his artwork. The SF Encyclopedia notes his pre-eminence, but also that he is “sometimes attacked as sexist”.

Which leads us (you though I was never going to get there, didn’t you!) to the book in hand : ‘Imago’.

The book is large format, and has 70+ pages showcasing ‘the sensual exploration of women trapped blah blah’/’pin-ups’ (delete as preferred), on high-quality (probably wipeable) paper.

There are background notes to the illustrations, although they are sparser than I would like. More interesting are the preliminary sketches which are included. These pencil drafts show, to my mind, the artistic talent off better than a lot of the photo-realistic work included. These sketches tend not to have the sfnal trimming, and do actually enable you to see the person who has been drawn, whereas the glossy pictures tend to have an anonymity behind the eyes (or maybe the attention is drawn to the unfeasibly large breasts?!)

I’m probably going to hunt down the previous two volumes of Burns’ work, as this volume, as a singleton, gives just a view of one facet to his work, which for my money, doesn’t do him justice. It’s back to the beginning of this review – for me SF is about the blackness of space, alien landscapes, and humanity moving forward. I do hope that the future holds more for women than being squeezed into fetishistic outfits!

Nov 10, 2005Leave a Comment on Imago – The Fantasy Art of Jim BurnsAnthologies