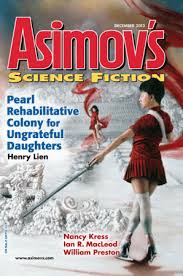 A clever, layered story that mixes technology and sociology and economics and human behaviour.

Earth has faced climactic and economic change, and is coming out of a breakdown that has seen the gated communities of the wealthy replaced by communes, as most of humanity is now ‘entangled’ – linked, post viral outbreak, into an almost gestalt unity. To get the story going of course requires an outsider, and that is Martha Chauhan, previously Madhur, who fled the sub-continent with her father in her childhood.

The story alternates between her in third- and first-person, as she herself has issues of identity, having survived a traumatic incident, the nature of which is only chillingly revealed at the end. It’s set in a snow-covered urban setting, with some half-built, empty buildings, and deserted, ransacked gated communities giving a strong sense of setting (‘the other houses with their blackened Halloween eyes stare back at her’). As it progresses, we find out more about Martha, and just what is going on.

It’s a story that should be studied by tyro SF writers as an example of what a really good SF story should do. Evidently picked for Strahan’s take on the best of 2013, and rightly so.