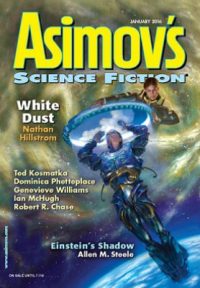 A short story that doesn’t really go beyond it’s primary premise, and a premise that is flagged up in the title, which rather misses an opportunity IMHO.

The last issue of Asimovs featured ‘Of Apricots and Dying’ which was set in a patriarchal society in the Hindu Kush, and gave a good flavour of how that society works.

Here McHugh creates a patriarchal society, with aliens with two sets of arms, and some strange names, and some issues around gender around chilbirth, but it’s nothing that hasn’t been done many times before. So it really just boils down to the way that this alien society abhors multiple births, and the fact that the human protagonist can’t tolerate this.

More from this issue more details.