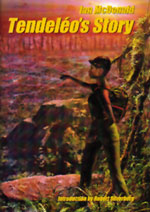 In that first story a western reporter flies in to view the Chaga. Here McDonald describes (vividly and what to me comes across authentically!) the menace from the perspective of a young African girl. Her father, the local minister, has a huge crisis of faith at the inexorable encroachment of the nanobot infestation. She finds herself morally and physically compromised, not by the chaga, but by her and others response to it and the enforced evacuation. With an echo of the evacuation of Hanoi, Tendeleo manages to flee the country, ending up in Manchester (England) and finding an Irish lover.

Her past catches up with her, as she is herself infected by the chaga, and she is forcibly repatriated.

The ending sees her and her lover facing up to the alien challenge and in fact embracing it, and from their own strength rebuilding that which had been taken from them, building a new, very new!, future for themselves and for humanity.