[This item is for sale, please contact me for details.] 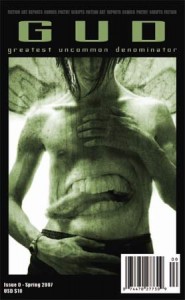 GUD is Greatest Uncommon Denominator Magazine, a print/pdf magazine with 200 pages of literary and genre fiction, poetry, and art. Order a copy and find out what GUD is. :)

New meanings are being attached to beauty. GUD exposes you to these, takes you to the edge of the familiar. We bid you, the reader, to step over the line. We open new windows of thought, engage and transport you. GUD delivers intelligent, memorable, and entertaining words and pictures that you’ll want to discuss with a friend. We promise to leave an impression.

So, let’s see what impression is left on this reviewer…

Issue 0 is a striking volume, 193 pages in a format slightly taller/narrower than a paperback, with an eye-catching, lip-smackin’ cover (by konrad kruszewski), and its jam packed with a lot of fiction, poetry, miscellany and the odd b&w artwork/cartoon. The contents page lists 40 entries, not distinguishing between the types of content, amongst whom there were a few names from the genre market which I recognised, leading me to hope that there wouldn’t be too much of a lean towards ‘literary fiction’ which (making a broad generalisation here) tends not to do that much for me.

And indeed the issue provides a good mix of contemporary, speculative fiction.

There’s a long tradition of private eye stories in SF, with a hard-bitten gumshoe invariably down on his luck until a glamorous dame walks into his office. This eschews such a caricature, and provides a dark, near future London suffering from climate change. The ‘tec in question specialises in finding missing people, but also, by way of contract losing those people he has close to him. We find out about Jack as the story progresses – coming across one missing youngster living on the streets, and find out just how mixed up Jack is, as he readily turns over the boy for the payday.

By way of a change, some far future SF, of the type that wouldn’t be out of place in Asimovs. It starts ‘In a transparent, protective cocoon, twenty-four met to mourn the dying Earth’ and we follow the experiences of a few who decide to show their love to those who have gone before, but who find sharing of their pain is too much for even far future immortals.

Songs of the Dead. Sarah Singleton and Chris Butler.

A lengthier story than you tend to come across in the semiprozines, consequently avoiding the bittiness that can result through having a lot of shorter stories. These two established writers provide a very substantial Dickensian tale of menace, in which a young boy becomes apprenticed to a gentleman who believes that is possibly to use portraiture to better understand the demons that lie in the heads of the mad. Worse still, that those demons can indeed be exorcised, in a compelling story.

Athena Workman. One in Ten Thousand.

I really want to call this a more workmanlike story in contrast to the previous one. But that would be crass beyond compare.

Rather, in contrast to the previous story it’s more typical of the semiprozine story – a single idea, handled reasonably well. The idea is that there is licensed euthanasia of elderly relatives suffering from dementia.

A short piece consisting of four short parables revolving around the theme of travel.

Shweta Narayan. The Doctrine of the Arbitrariness of the Sign.

Young Andrew has a way with words.

An affair that lasts several years, but in which the partners never meet, and barely correspond, results in the creation of a computer virus…

Stoddard has had three good stories in Interzone of late, and this is another similarly effective piece. The narrative is developed through the eyes of a babe in arms, taken by her parents on a tour of the White House in an alarmingly Big Brother future. However, the baby, and the reader, find out more about her as the story progresses, until…

A tongue-in-cheek, somewhat non-PC look at email spam through the legs of a breast augmentation, as a young woman who finds that leasing out her enhanced figure for relaying email spam is more trouble than it is worht.

A more mainstream fantasy tale, in which the daughter of a near-immortal warrior king has to struggle with his approaching death, and to seek out a future for herself after he is dead. The story wouldn’t be out of place in The Magazine of F&SF.

Two shorter pieces featuring relationships. In the first Richard gets concerned when his wife pounds his meat – it means there is something wrong, but they are able to reconcile their differences through communication. In the latter a couple make a more bestial coupling under a full moon.

Fair to say that at this point in reading the magazine, I’m getting a little fatigued. This is because I’m reading it from p1 to p192 in just a few sittings, whereas its probably the kind of volume best dipping into over a couple of weeks or a month. However, it’s either going to get read in a couple of days or else, from experience, it’s going to gather dust, so I press on.

Short story in which a feisty old man still wants to sow his seed, and his informal carer feels obliged to facilitate this transaction, and also to partake…

Flagging a bit, this story felt like ‘Waiting for Godot’ only without the colour and the action, if you get my drift. I did make a second attempt, somewhat fresher, when writing this review, but baled out after a couple of pages of dialogue.

A sort of mashup of ‘Rebel Without a Cause’ and ‘The Young Ones’ with a surly teenager being out-surlied by a fellow pupil who is willing to go that little bit extra to show just how little he gives a fuck. Excellent.

Janrae Frank. The Tale That Launched a Thousand Ships.

A short history of a king with a mission.

As far as the fiction is concerned, this is as strong a semiprozine as I’ve seen. There are some strong stories here, some reasonable stories, and some shorter pieces that are fine as far as they go. I can’t pass much of a comment on the poetry, as it’s not something I read, although at a cursory glance I can see there might be a bit more to it than the doggerel that generally gets passed as SF poetry. The artwork ranges from ‘proper’ artwork as per the the cover, to more cartoony drawings, the former working better for me. It’s on sale as both a dead-tree and an electronic version, with a samper on the GUD website. The first print run of issue 0 is already sold out, but more are evidently on the way.