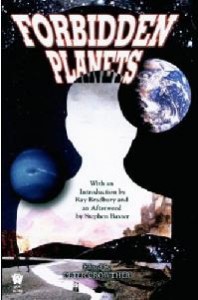 The fourth in a sequence of DAW anthologies edited by Peter Crowther in recent years, following on from the well-received Moon Shots (1999), Mars Probes (2002), and Constellations (2005).

The loose theme for this series is by way of a celebration of the 50th anniversary of the release of the classic movie ‘Forbidden Planet’, and the back page states : “Here are twelve tales of the perils that may await humankind on distant worlds or in different dimensions, life-transforming or endangering encounters that can redefine our very concepts of both reality and sentient life-forms”

Plenty of scope there for the authors, all but three of the dozen of whom I would put up there as putting the ‘best’ in the best short SF in recent years. (One of the three who doesn’t make the cut is on account of being someone who was entered into the SF Hall of Fame many years ago!)

That said, the collection gets off to an indifferent start with Matthew Hughes’ ‘Passion Ploy’ which features his Luff Imbry character. Hughes’ regularly (very regularly!) features in F&SF with stories featuring Hengis Hapthorn and Guth Bandar, neither of which do much for me, although they clearly do for many others. As Donna McMahon said of Hughes’ Luff Imbry novel, Black Brillion: a “..novel which is very much a matter of taste. Bibliophiles, eccentrics, Scrabble players, and readers such as myself who were warped in childhood by over-exposure to Dickens, Dumas, and Gilbert & Sullivan seem most likely relish Hughes’ eccentrically embellished scenery and sardonic persiflage” (link : SF Site). I’m a bit of a bibliophile but eccentrics, Dickens, Scrabble, Dumas, and Gilbert & Bloody Sullivan are all things which I would generally cross the road to avoid, and I think this is the rub : they’re all very 19th century (ok, excluding Scrabble) which suggests to me sensibilities of a more nostalgic and backward looking nature, rather than the innovative and forward looking sensibilities which I associate with science fiction.

With regard to this story, having read it, there isn’t actually much to report, compared to the other stories in the collection. There’s nothing particularly exceptional about it, and without the flowery language and dialogue it’s a tale of Imbry coming into possession of an offworld artefact, which has an effect on those who bespy it (I’m not sure that Hughes used the word bespy, but it’s the kind of word you would find in the story), over which there are some shenanigens regarding ownership, and in the end some desserts are justly served.

Next up, Jay Lake’s ‘Lehr, Rex’ is a horse of an altogether different colour, whose first paragraph gives an immediate sense of place and of character, and probably has more texture and description in it than the preceding story. Lake playfully takes Forbidden Planet’s use of Shakespeare ‘The Tempest’ as its inspiration by using Shakespeare’s ‘King Lear’ as a counterpoint (check the title dude). It echoes the original film plot, in that it revolves around a rescue ship finding, surprisingly, some remnants of the crew of a stricken ship crashlanded on an inhospitable planet many years ago.

The commander, Lehr, has been blinded by the harsh radiation, whose Exec Officer is – a woman! Lake plays with the Golden Age view of gender roles in the way that the captain of the rescue ship continues to struggle with a female in such a role.

There is a mystery to be solved, and the rescuers find out more about themselves than they had imagined, in a story which has a lot to like about it.

Paul McAuley’s ‘Dust’ sticks to the brief as well, with a tight drama set on a very inhospitable planet. Linval Palmer has landed on the dustbowl, superhot planet to try and find his brother, lost some time ago. When he goes missing, the captain of the ship he hired to get him into orbit around the planet is reluctant to follow him, but is given no choice in the matter by his neuter secretary, John-Jane Smith, and some henchwomen.

As a minor aside, the story is slightly compromised in the first two pages by two niggly things which stop the flow and which should really have been attended to:

The story quickly unfolds, as the nature of the Dust is revealed, and all those who have variously landed on the planet find themselves becoming more accustomed and acclimatised to living there than they could have thought humanly possible.

Next up, Alastair Reynolds’ ‘Tiger, Burning Bright’ doesn’t attempt the dangerous planet principle of the collection, but neatly ties in with both the movie Forbidden Planet, and Shakespeare’s ‘The Tempest’ with a far-future brain-boggling billion brane-al setting. Travel between branes, in which each alternate universe has fractionally different physics, is possible, and Adam Fernando is a long way from home, investigating potential leaks from a sensitive research experiment.

The story is relatively minimal, with Fernando investigating both the leak and the death of the main scientist. He gets a look at the very alien, very large scale tech which is available in this brane (as happens in the movie, with a nod to the aliens in the movie in the name given to these aliens), and comes to the conclusion that there have indeed been messages sent back across branes and across time, inspiring the likes of Shakespeare. Furthermore, he is convinced that the brane structure is in fact a circular one, and the alien ones who were spooked by what they saw billions of branes away were in fact spooked by their own images, from the rear, and he has to ensure that humanity doesn’t make the same mistake.

The story opens up some clever ideas, and is tantalisingly short. His recent novel ‘Pushing Ice’ similarly puts humanity under the microscope, seeing us as an infintesimal part of an immense galactic backdrop of time and space, as does his recent novella ‘Understanding Time and Space’ review

I was pleased to come across Paul Di Filippo’s ‘The Singularity Needs Women!’ as I haven’t seen much from Di Filippo of late. Here he has fun, as will any reader who is tuned into the same frequency as his humour, with emergent singularities and the options available to humanity once we are free from our meatbodies. The emergent singularity actually appears in the bar in which Lu is drinking with his girlfriend Maruta, who is back home after a long voyage and very much embodied in human form. It seems that the singularity is in need of women, and duly leaves with Maruta – and, it appears, with thousands of other women across Earth.

Lu of course is determined to get her back, requiring him to be disembodied and uploaded into a ‘sludge-bucket’, a merest shell of a human form, in order to travel to the planet Zaniwul. We follow the travails that his ego undergoes in searching for a loved one who many not actually wish to be found, as he struggles with what is real and what is not. It’s an enjoyable, inventive, forward-looking story.

Stephen Baxter’s ‘Dreamer’s Lake’ looks at life being eked out on a very inhospitable planet, in the shape of stromatolites, a version of bluegreen Earth algae. This microscopic lifeform is far from our definition of self-aware intelligence, but as their planet is about to be pulverized by a planetlet heading its way, one of the scientific crew decides to make a stand on their behalf. And in doing so we find out a little bit about what it is to be human.

A more direct take on the original movie than most in the volume comes with Chris Roberson’s ‘Eventide’. The crew of the Underspace Ship Phonix have crashlanded on a planet, evidently perfectly, and mysteriously, suited to human life. The crew are pair-bonded, and have to adjust their relationships as these partnerships are broken up by death, but, chillingly, Zihl finds out that the captain, Kloster has a very hands-on approach to trying to find the perfect combination of partners for the crew. Roberson puts a lot into a short space in terms of characterisation and the societal background to the crew.

Scott Edelman’s ‘What We Still Talk About’ goes very far future in looking at virtually immortal, all-powerful, dilettante humans. Selene decides a jaunt to dear old Earth will shake her out of her slight malaise, and she and the several identical instances of her husband, and a pair of friends, make the trip. Nonplussed to find that Earth isn’t there any more, it is no work at all for her friend to create it again, just as she remembered it, and the four take a trip around the ruins of a city. There’s a melancholic tone throughout, with even the mortal drama at the end turning out to be a phantasm.

We return to the memorable setting of the novel ‘River of Gods’ and two recent Asimovs’ stories with Ian McDonald’s ‘Kyle Meets the River’. Kyle’s father is one of the Westerners ‘helping’ to rebuild a splintered India, and we follow his relationship with a local friend, Salim, who spend their days playing football and spending time linked into an advanced MMPOG. Kyle takes a big risk in sneaking out of the compound in which the Western community live, and gets to see local life upclose. The story lacks the big punch of the aformentioned novels/stories and feels slightly out of place here in the limited extent to which it addresses the theme of the collection.

Michael Moorcock’s ‘Forbearing Planet’ is a wry tale which looks at how a planet’s innerself, the Gaia, might be the root cause of resistance to those on, and getting under, its skin. Prospero Pidgeon (actor Walter Pidgeon was in the original movie) advises, with the aid of his robotic sidekick Robert Robot, the latest humans to settle on Temptation II that their behaviour is likely to lead them to the same response from the planet as three previous civilizations. However, it transpires that the humans, in contrast to those of the Forbidden Planet, are able to use their dreams to their advantage, rather than the planet using their dreams to its advantage.

Alex Irvine’s ‘This Thing of Darkness I Acknowledge Mine’ is an unsettling transcript from one spacegoer who is struggling to understand what is happening, where dreams end and where reality starts, as an altogether insidious psychological attack from the planet on those who have landed wreaks mental havoc. The inner dialogue is well-handled and keeps the reader off-balance throughout.

Adam Roberts’ ‘Me*Topia’ starts with a crashlanded ship and a small crew trying to come to terms with the anomalous planet on which they find themselves. More is revealed as the story progresses, with some neat twists and revelations. The setting is a doozy : a flat, circular ‘planet’, side on to Earth, and off the ecliptic plane, the better to be hidden. The creator of the planet is a human, or more specifically, a homo sapiens, and the visitors are the genmod humans who had been left behind on the now inhospitable planet, ‘uplifted’ to homo neanderthalis, the better to survive. You’d have to be an academic like Roberts to spot that his homage is less to Shakespeare’s ‘The Tempest’ than to Homer’s Island of the Lotophagoi from the ‘Odyssey’

The paperback finishes with a couple of paragraphs from each author, outlining their thoughts in approaching their stories, which is a neat addition. Overall, the quality of the stories is high, and a fine collection showcasing primarily British authors, although perhaps just a tad below the quality of last year’s ‘Constellations’.